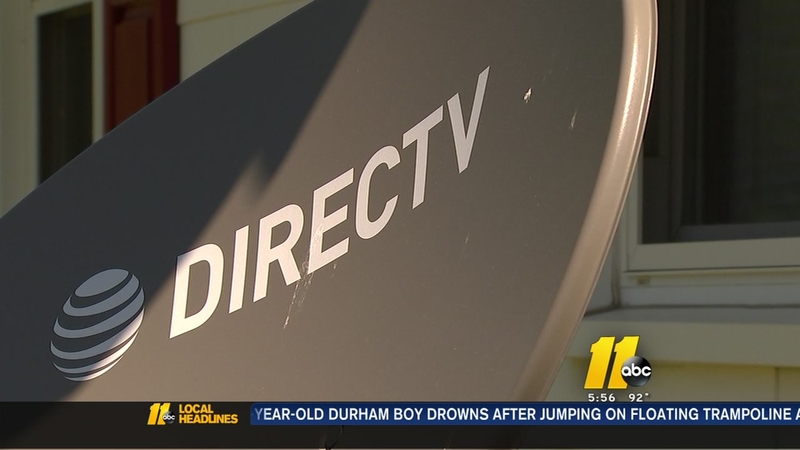 CLAYTON, North Carolina (WTVD) -- When you have satellite TV service installed, you don't think there will be any problem. For Bill Berry, he was left with thousands of dollars' worth of damage.

Bill owns a home in Clayton and rents it out. His tenant was having DirecTV installed. During the installation, by accident, the technician put a hole in Bill's siding.

Bill says he didn't think it was a big deal but did want the damage taken care of.

"I took some pictures of it and started sending it to the companies," he said.

Bill says he was told to get estimates to repair the damage. When he did that, he realized the damage was bigger than he thought since the siding is asbestos siding and it's not an easy fix.

"When they came out and looked they were afraid it would bust the pieces around it and above it. Unfortunately dealing with asbestos, you can't do that," he explained.

The several estimates to safely remove all of the asbestos siding and put on new siding was in the thousands. Bills says he tried to work with DirecTV and their subtractors but said he wasn't getting anywhere.

"I just wanted to get back whole again," he said.

Berry reached out to me and I got everything off to DirecTV. It didn't take long and Bill got a resolution he was happy with.

"After you got involved, thankful for the companies they were so easy to work with," he said.

Bill just had the new siding put on his rental home.

A rep with DirecTV provided this statement: "We appreciate the customer's business and regret that they've been inconvenienced. It is always our goal to provide our customers with a positive experience. We've agreed to reimburse them for inadvertent damage caused during install."
Report a correction or typo
Related topics:
home & gardenclaytonjohnston countytroubleshootersatellitesconsumer concerns
Copyright © 2021 WTVD-TV. All Rights Reserved.
TROUBLESHOOTER
Are extended warranties worth it on back-to-school laptops?
60K students left NC public schools in 2020: What's driving the drop?
Watch out for scammers posing as your favorite Instagram accounts
Troubleshooter helps worker told she'd have to pay back $8k in unemployment
TOP STORIES
LATEST: Gov. Cooper to give COVID-19 update at 3 p.m.
J&J says 2nd dose of vaccine after 2 months results in more protection
Biden enlists allies in tackling climate, COVID in UN address | LIVE
Nurse, 46, dies from COVID-19 after refusing vaccine, brother says
Autopsy set to be performed on Petito; Laundrie remains missing
Mom of man, 20, killed in NCCU shooting says he was determined, loving
Show More
How to find out if your information was part of a data breach
Powerball drawing yields no winner; lottery jackpot at $490M
NC native who prosecuted Derek Chauvin reflects on case at Duke
NCSU's Keatts helps tailgating fan find lost wedding ring
Wake doctor 'optimistic' after Pfizer says vaccine safe for ages 5-11
More TOP STORIES News