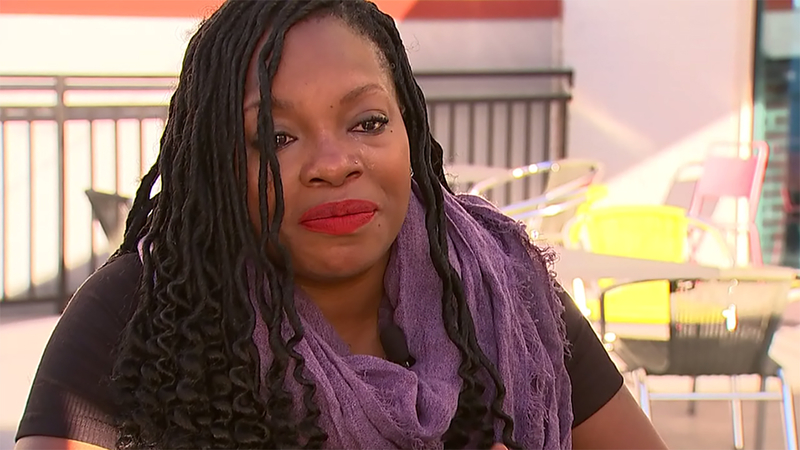 DURHAM, North Carolina (WTVD) -- Tashia Scott is a mother of two who right now does not have somewhere to call home. She is still trying to rebound after surviving her second abusive relationship.

"It's a struggle," said Scott from the patio of the American Underground in Durham, a place where start-up companies can work.

It's a position Scott never thought she would find herself in.

"He said 'there's no way you'll ever beat me. You'll have to win the lottery to beat me,' " Scott said, recalling the words of her first abuser when she was trying to get out of that situation.

That was her reality years ago.

More on her mission

AN APP THAT COULD SAVE A LIFE

Today, she is out of that world. She is creating an app she hopes will give survivors the justice she said the judicial system cannot.

The Safe Space app is a tool where she says those going through abuse can keep written, audio or video logs of the abuse.

"The app is hidden in a news feed," Scott explained. "You hear footsteps, click, you're out of there."

In the prototype she showed us, that news feed app is called 'Buzzy News,' but that name would change from user to user. The app also asks you set up a safe word when creating a profile.

That safe word will voice-activate the record mode on the app if the user is not able to reach the phone during an attack.

Or it can reach out to your counselor and even 911.

When Scott was getting ready to leave her first physically abusive relationship, she said she would document her injuries with video on her phone. But it wasn't enough.

"I'm documenting cut lip, black eye, hair pulled from my head, and I'm told 'do you have proof that that's your bathroom,' " Scott said.

So in her app, everything is time-stamped and location stamped. Also, only authorities will have the ability to turn the app off, so your abuser would not be able to access it.

The app also allows you to designate a person who can have access to everything you log. It will also alert that person if they don't hear from you.

For example, if you tell that person you're going to call them in two hours and they don't hear from you, they can go into your app and see if you've recorded any incidents. They can also call police and give authorities access to everything you've logged.

The app also has a space to store your protective orders paperwork and a photo of your abuser. Scott said you are required to take those files everywhere you go, a restaurant, work or shopping.

She said in her case she was carrying a lot of paperwork. So now, everything can be stored in the app and can be conveniently shared with anyone.

As far as a paper trail when it comes to downloading the app, Scott said she does not want victims downloading it themselves.

If someone is looking for the app, that means they may have already looked for help. Scott wants domestic-violence advocates to be the ones who download the apps for the victims so it can't be traced.

She wants to create a system that leads to convictions.

"This is a war, this is war and the abusers are predators," Scott said, with tears in her eyes. "I'm going to make sure that every single survivor has a voice and is super empowered. Not just empowered but super empowered, never to look back again."

Scott hopes have enough funding to be able to roll the app out by the end of November. She is also raising money to one day open a center to help domestic violence survivors.