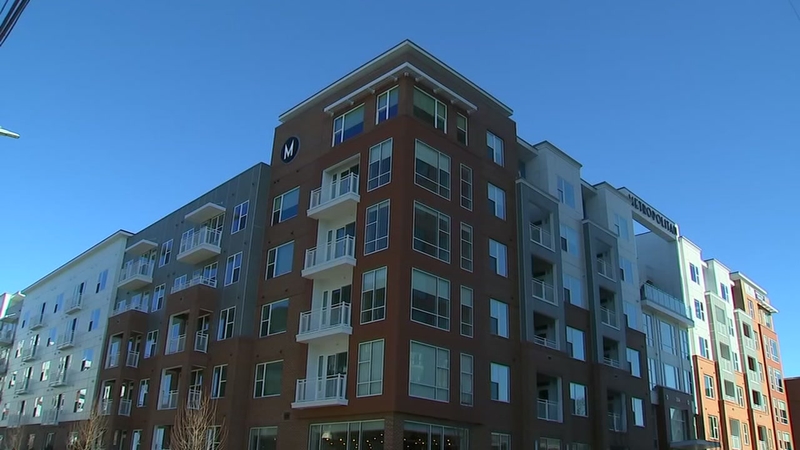 RALEIGH, N.C. (WTVD) -- Jamar Streeter fell in love with his new apartment the second he crossed the threshold.

The amenities at The Metropolitan in downtown Raleigh are state-of-the-art.

And the view of the skyline from his top-floor, two-story unit is picturesque.

But despite all that, The Metropolitan can't escape its phoenix-like origins.

"A friend of mine the other day was like, 'Isn't that the building that burned down?'" Streeter said.

The Metropolitan will likely always be remembered by some as the building that rose from the ashes of one the largest fires in Raleigh's history.

The March 2017 blaze burned so hotly at the still-under-construction site that it damaged buildings in the blocks surrounding it.

Mariana Baggett who lives in The Link apartments across the street will never forget the fire.

"I was looking at downtown apartments whenever the fire happened," she told ABC 11.

She and other residents of The Link had to live with the aftermath for months.

That included repairs to their building, closed streets, and lots of construction noise.

She and other residents of The Link see Friday's opening of the Metropolitan as a milestone.

"I'm excited to see that the road is finally open, and we don't have quite as many construction vehicles driving in and out. And I'm also excited to get some new neighbors downtown," she said.

Her friend Alex Paschal added, "I think it's going to be a good thing to welcome new people to the community and to get around town easier."

As Streeter unpacked boxes in his apartment at The Metropolitan on Friday, he said the legendary fire actually piqued his interest in the building.

But he said it's the urban lifestyle that really brought him there.

"The vibrancy of downtown Raleigh attracted me immediately, the community, all the places to go walk, and Bird of course. Being able to ride a scooter downtown was very attractive as well instead of using my car," he said.

The only building damaged by the fire that hasn't reopened is the Quorum Center.

ABC11 reached out to Quorum management but hasn't gotten a response.