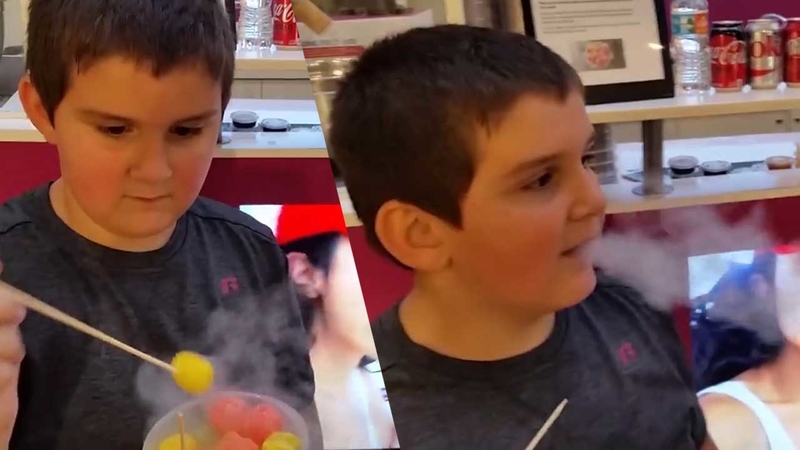 A mom in Florida said she's grateful for her son's life after he ate a snack at the mall and then wound up in the hospital.

Racheal McKenny was at The Avenues Mall in Jacksonville, Florida with her kids last week when they asked to try a dessert called "dragon's breath." The popular confection is made by coating cereal puffs in liquid nitrogen. This allows people who eat it to look as if they're blowing smoke like a dragon.

"They had fun and it seemed harmless enough," McKenny wrote in a post on Facebook warning others about the snack.

On the way home, her son, Johnny, started coughing and then experiencing trouble breathing. Johnny has asthma, which McKenny said is typically pretty mild, so she did not bring his inhaler with them for a trip to the mall.

Realizing he needed help quickly, the family pulled over at a nearby fire station. The firefighters gave him albuterol and an IV and took him to the hospital.

"Johnny is home now," McKenny wrote. "He will be on steroids the next few days and his nebulizer machine as needed, but he's doing well."

Doctors confirmed that the nitrogen gas from the snack is what brought on Johnny's issues, according to ABC News.

This is not the first time that dragon's breath has made headlines. In October a teenage girl was reportedly burned by handling the dessert.

A manager at the kiosk McKenny's family visited told WJAX that there is now an allergy and asthma warning for customers.

McKenney wrote that she will now be carrying Johnny's inhaler with her as a precaution, and she's warning other parents not to let children with asthma eat dragon's breath.

"PLEASE, if you know someone that has even just a mild case of asthma, do NOT let them have this snack," she wrote. "I should have known better, but it did not occur to me that this food could have this effect. As a result, my son could have died. Please don't make the same mistake I did."
Report a correction or typo
Related topics:
health & fitnessfloridaparentingsnackssnack foodasthmafamilyu.s. & worldwarning
Copyright © 2022 WTVD-TV. All Rights Reserved.
TOP STORIES
Snow likely to start around midnight, last until sunrise
Cooper vetoes bill that would push NC primary to June 7
How many times can I reuse my N95 mask?
10 injured in PA bridge collapse; human chain formed to help
Decades after TV anchor disappears, convicted rapist denies connection
LATEST: Breakthrough cases make up 37% of new COVID infections
Durham Police arrest two in Nov. shooting that left 1 dead, 2 injured
Show More
Moderna launches trial for HIV vaccine that uses mRNA technology
Durham Police make arrest in fatal hit and run
What is antisemitism? Explaining anti-Jewish ideas and hate
Holocaust survivor, great-grandson educate next generation on TikTok
Essentials to keep in your car during winter storms
More TOP STORIES News