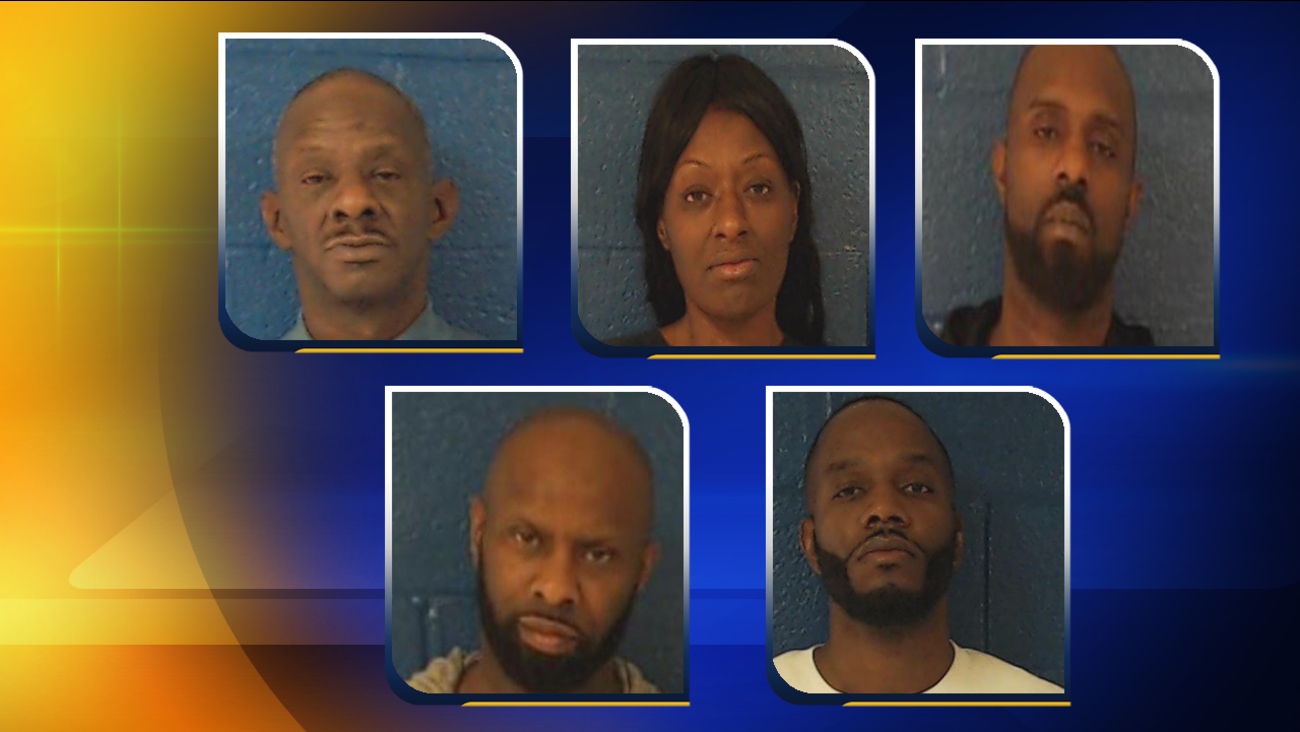 NASH COUNTY (WTVD) -- The Nash County Sheriff's Office has arrested five people it says were bringing over 14,000 baggies of heroin into the area from New Jersey.

On Friday, the sheriff's office Drug Task Force said it got a tip and was able to find a vehicle exiting I-95 South onto U.S. Highway 64 West. According to officials, the vehicle was stopped for a moving violation on W. Washington Street in Nashville, North Carolina.

Officers searched the vehicle and were able to seize 283 bricks (14,150 bindles) of packaged heroin, along with 101.1 grams of raw heroin. Another vehicle involved in the case was also stopped.

Five people were arrested at the scene. Four are from New Jersey and one is from Ohio.

Shamsuddi Green is charged with four counts of conspiring to traffic opium or heroin and given a $1 million secured bond.

Rachine Green and Kawuan Robertson are charged with one count of conspiring to traffic opium or heroin and were given a $250,000 secured bond.

All five have their first court appearance set for Tuesday in Nash County.

ABC11 has decided to slowly reduce the number of stories on the website that have a comments section. We believe very strongly that our audience should have an opportunity to discuss and debate events in our world, however, we have not been able to moderate the comments as well as we would like. Instead of hosting a platform that could allow a few loud and ugly voices to dominate a conversation, we want to encourage everyone to join us on our social media platforms and speak out there. Facebook: facebook.com/ABC11 Twitter: twitter.com/ABC11_WTVD
Report a correction or typo
Related topics:
nash countycrimedrug arrestnorth carolina news
Copyright © 2022 WTVD-TV. All Rights Reserved.
TOP STORIES
FBI raids Fayetteville church accused of operating as a cult
Supreme Court to hear case on state authority over elections
SCOTUS limits EPA's ability to reduce emissions, fight climate change
Supreme Court allows Biden to end Trump's 'Remain in Mexico' policy
Durham Technical Community College evacuated due to bomb threat
Durham's East End Connector opens after construction delays
Texas woman accused in cyclist death arrested in Costa Rica
Show More
1955 warrant in Emmett Till case found, family seeks arrest
Biden says he supports changing Senate filibuster rules
Jackson sworn in as 1st Black woman to sit on Supreme Court
Local fans, survivors speak on R. Kelly's 30 year prison sentence
Transgender woman says she was denied job at a NC Catholic school
More TOP STORIES News