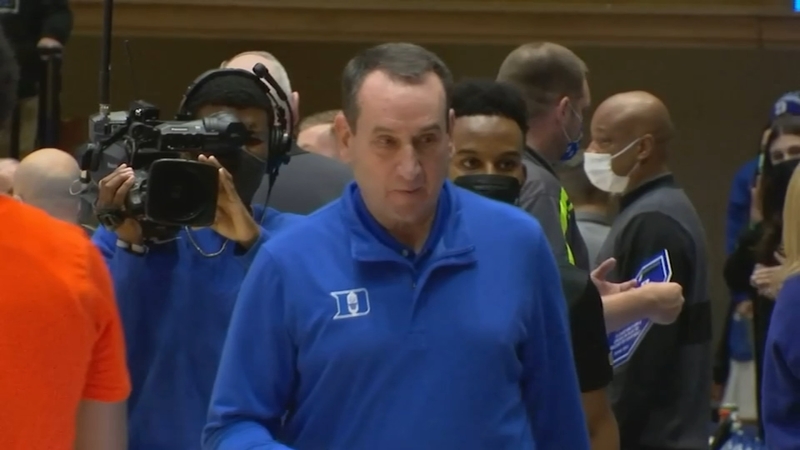 That meeting was between him and the entire student body.

"When we play tomorrow night, cheer like it's your home because it is your home," Krzyzewski said.

Just learned of a special speech #CoachK gave to the student body tonight that just wrapped up inside Cameron. I’m told he called it a “family meeting” and he said tomorrow is not about UNC #abc11 pic.twitter.com/GS1T7M999x

The legendary coach will roam the sidelines at Cameron Indoor Stadium for one final time Saturday night against heated rival North Carolina, no less.

"There's nothing else in sports where you can say K and it means Coach K," said Harvey Allen, a graduate student who is tenting for the game Saturday.

Before the rally inside Cameron on Friday night, Allen and other students came out to the ESPN College Gameday set in front of the arena to watch as the TV crew previewed the game.

After a speech inside Cameron from #CoachK himself, students were given these posters and a program on their way out @DukeMBB #abc11 #DukeUNC pic.twitter.com/Fs5eiacJVO

The setting for Gameday is in Krzyzewskiville, where undergraduates traditionally camp out for the game. The tents were pulled up a few days ago for TV crews to come in and set up.

It also gave students time to rest and build up their energy.

"I don't think privilege does enough justice to how I feel right now," said Ben Randoing, a senior and a line monitor for the tenting process. "I'm going to take it all in, enjoy it and I wish Coach K the best."

She grew up in Goldsboro and was raised a UNC fan because her dad went to Chapel Hill. Her mom, though, went to Duke.

Ticket prices were on the Super Bowl level on the resale market. To get in, Stubhub said it would cost around $4,500. To have better seats, you'd have to pay more than $10,000 at least.

Thanks also to @TG3II for talking to me about #CoachK today. He said “he’s not only a great coach but a great person.” He’ll be inside Cameron for the game Saturday #abc11 pic.twitter.com/FdLq7yWUwF

"Just to be on campus here and especially being from North Carolina, it's a blessing," said Todd Gurley, the former All-Pro NFL running back who is from Tarboro.

He'll be inside for the game Saturday and has met Coach K on numerous occasions.

Jay Bilas, who will call the game for ESPN, signed autographs for fans Friday night. He played for Krzyzewski back in the 1980s and said he doesn't know how he's going to feel at tip-off.

"It's going to take on a different feeling when you get down to the floor," he said. "On the one hand, you want to hold it together and do your job and be a professional, but on the other hand, you want to experience it, and I don't yet know how it's going to feel."
Report a correction or typo
Related topics:
sportsdurhamcollege basketballduke blue devilsretirement
Copyright © 2022 WTVD-TV. All Rights Reserved.
TOP STORIES
NC woman wins $2M lottery on Friday the 13th
Gas prices continue to hit new highs in NC
Wake Co. Board of Education approves meal price increase for 2022-23
Cha Ching! Grocery store employee wins big on day off
Madison Cawthorn concedes primary to Chuck Edwards
Taylor Swift receives honorary degree from NYU
Lavish spending on NC primary surprises local political science expert
Show More
Pennsylvania election results: Mehmet Oz, Dave McCormick neck and neck
Wake County Sheriff Baker going into runoff election
Ex-cop pleads guilty to manslaughter in George Floyd's murder
Budd, Beasley win to set up Senate showdown in November
Amber Heard finishes testifying in Johnny Depp defamation case
More TOP STORIES News