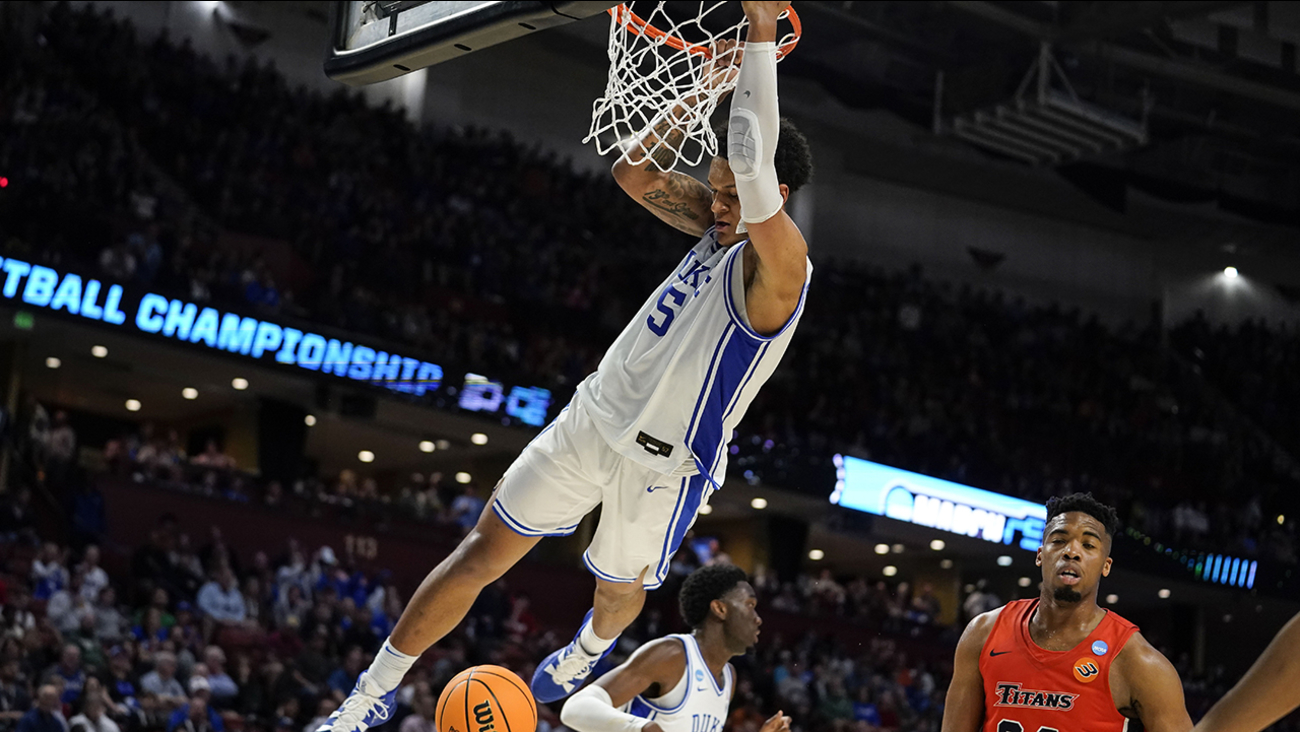 Duke's Paolo Banchero, flies in for a slam in the first round of the NCAA tournament against Cal State Fullerton on Friday in Greenville, S.C. (Brynn Anderson)

Freshman Paolo Banchero scored 17 points to lead the Blue Devils (29-6), who jumped to a double-digit lead in the first 4 1/2 minutes and remained in control throughout. Duke led by 10 at halftime and pushed the margin to 20 midway through the second half, avoiding the shocking exit that befell another of the sport's top programs - Kentucky - in a 2-vs.-15 matchup a night earlier.

"I mean, we all watched the game last night," said Wendell Moore Jr., who had 13 points, six rebounds and six assists. "I mean, obviously we didn't want it to happen to us as well."

The West Region's No. 2 seed had five players score in double figures while playing in its neighboring state, backed by vocal sections of fans eager to be part of what they hope will be Krzyzewski's six-game run to title No. 6.

Next up for Duke will be either Michigan State or Davidson in Sunday's second round.

Duke has long begun its postseason runs with added attention as a blueblood program with five NCAA titles. There's extra scrutiny this year with any game potentially being the last for the winningest coach in college basketball history - down to TV cameras following Krzyzewski walking into the arena hand-in-hand with his wife, Mickie, and the team.

The Blue Devils haven't looked quite the same of late, potentially weighed down by the enormity of playing through a legend's final games in a 47-year career. The Blue Devils suffered a dispiriting loss to rival North Carolina in Krzyzewski's emotional final game at Cameron Indoor Stadium and fell last weekend to Virginia Tech in the Atlantic Coast Conference Tournament championship game. 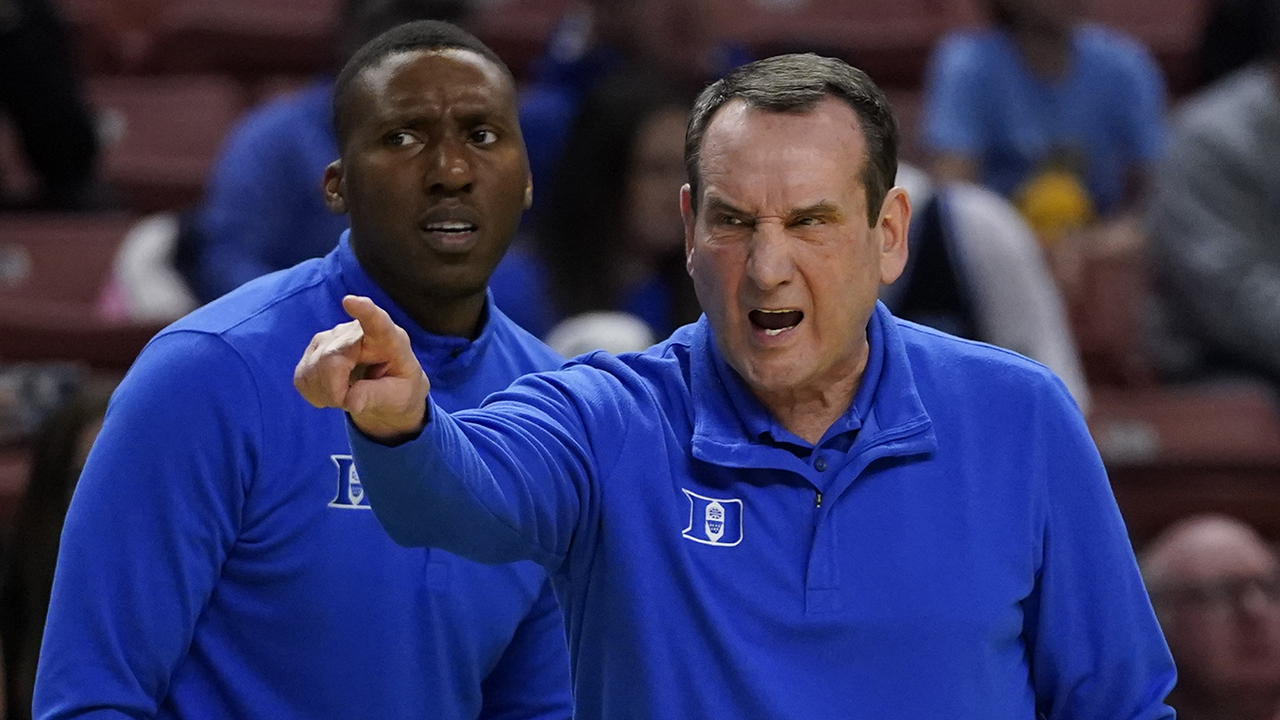 Duke coach Mike Krzyzewski still has plenty of fire as he voices instructions against Cal State Fullerton in the first round of the NCAA tournament on Friday.

But Krzyzewski said he thought his team looked "fresher" in workouts, and the Blue Devils got off to a fast start that backed up their coach's take.

"We played better tonight than we have been playing," Krzyzewski said.

Duke's first basket came on a smooth passing sequence that saw Banchero find Moore, who flipped it to Mark Williams nearby for the dunk. Banchero - who came in shooting 31% from behind the arc - hit a 3 from one corner, and then the other.

Moore followed with a 3 of his own off a kickout from Williams, good for a crisp 13-2 game-opening flurry. While Fullerton got within six points briefly late in the first half, Duke played confidently while protecting a comfortable margin the rest of the way.

The Blue Devils never trailed and led 37-27 at halftime and steadily stretched their lead in the second half.

The first half featured multiple players slipping and falling on the court. That included Moore, who slipped on a slick spot, got up, then slipped again and ended up in a near split.

That aggravated Moore's hip and had him exiting early in the second half to slowly pedal an exercise bike a the end of the bench before returning - along with a more intensive effort by staffers to wipe down the court at every stoppage.

"That damn floor was slippery," Krzyzewski said. "I mean, on both ends. So I don't know what it was. I know it wasn't the shoes. Nike called me and wanted me to make sure I didn't say it was the shoes."

Moore had said the team used days leading up to the tournament to work on recovering its defensive edge.

"Their offense really puts you in a tough position to communicate because there's a lot of dribble exchanges," Krzyzewski said, and he added, "So it's a big improvement. We've been a really good defensive team, but the last four games we were a really bad defensive team."

Damari Milstead scored 12 points to lead the 15th-seeded Titans, who missed 15 of 18 shots to open the game and struggled to get into a comfortable rhythm. The Big West Conference champions finished the game shooting 38%, including 5 for 17 on the 3s that are needed for any mid-major to take down a big favorite.

The Titans won the Big West Tournament to earn their fourth bid to the NCAAs and first since 2018 under Dedrique Taylor. The ninth-year coach said he had a mature team but acknowledged this stage was "a different animal." His team didn't look intimidated, but it couldn't knock down the open shots it got while struggling to handle some of Duke's size and length.

"Even in the timeouts, I said to the guys: 'The shots we're getting are good shots,'" Taylor said. "They just weren't falling. I think at the end of the day, Duke's size and athleticism and strength - those shots looked a little different today than they did last Saturday" in the Big West Tournament.