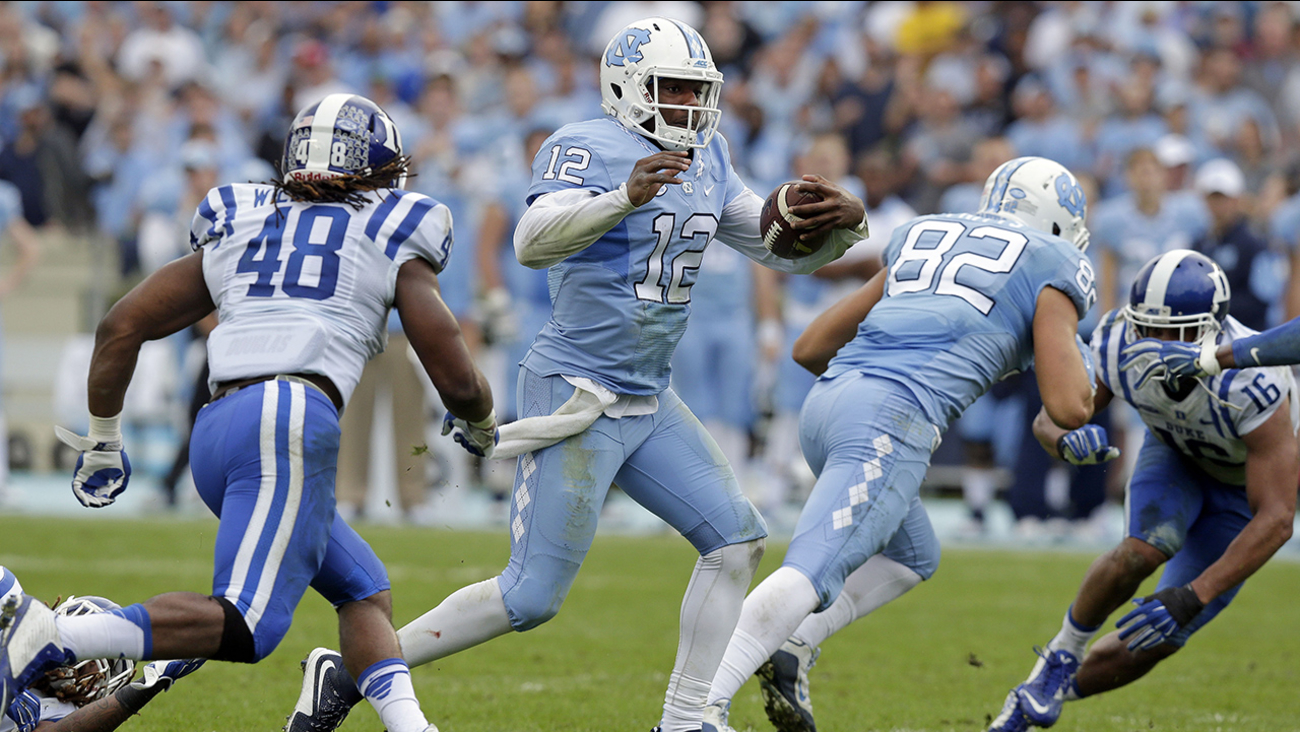 CHAPEL HILL, N.C. (WTVD) -- The final score from Chapel Hill seemed more fitting for a Big 12 box score, but for Duke, extreme frustration and disappointment loomed in the locker room after the Blue Devils' 66-31 loss.

Coach Cutcliffe quickly shot down any "post-Miami hangover" theories as a reason for the rivalry game defeat.

Instead, he harped on the Tar Heels' pace of play right out of the gate as a big cause of Duke's troubles.

"I don't know that I've ever seen so many explosive plays executed as their offense did," he said. "You give up explosives and the game can get away from you."

Cutcliffe on #UNC: " You give up explosives & the game could get away from you." Said Tar Heels had plenty of big plays. #ABC11Eyewitness

It certainly did early on and Duke's trouble with the deep ball started on Carolina's first snap of the game. Marquise Williams' flea-flicker pass to Ryan Switzer for an 89-yard touchdown reception was one of three big scoring plays that troubled the Blue Devils.

It continued in the in the second quarter, when a Blue Devils' defensive breakdown allowed Williams again to find another receiving threat in Mack Hollins for a 74-yard touchdown catch.

Right before the half, Duke also gave up a 49-yard Bug Howard touchdown catch.

Got a little testy at midfield- Both UNC and Duke squads had to be separated. Tar Heels lead 38-10 at the break #abc11eyewitness

"We knew that they had some fast guys, and we came into the game preparing for it. We prepared for it all week," said Duke corner back Breon Borders. "I think we kind of got lured to sleep a little bit and they came at us quick."

"I mean I'm not going to put frustration on our defense. For us we've got to take care of what we can take care of, and we'll let them handle their business," said Duke quarterback Thomas Sirk. "We left some plays out there on the field, and then again, they played at a high-level. You've got to give a lot of credit to UNC for how they came out and played."

The Blue Devils gave up 704 yards of offense in the loss and turned the ball over three times, a recipe for a Carolina "Victory Bell" win featuring the highest-scoring result in this rivalry game. The 66 points from the Tar Heels are also the most Carolina has ever scored in an ACC game.