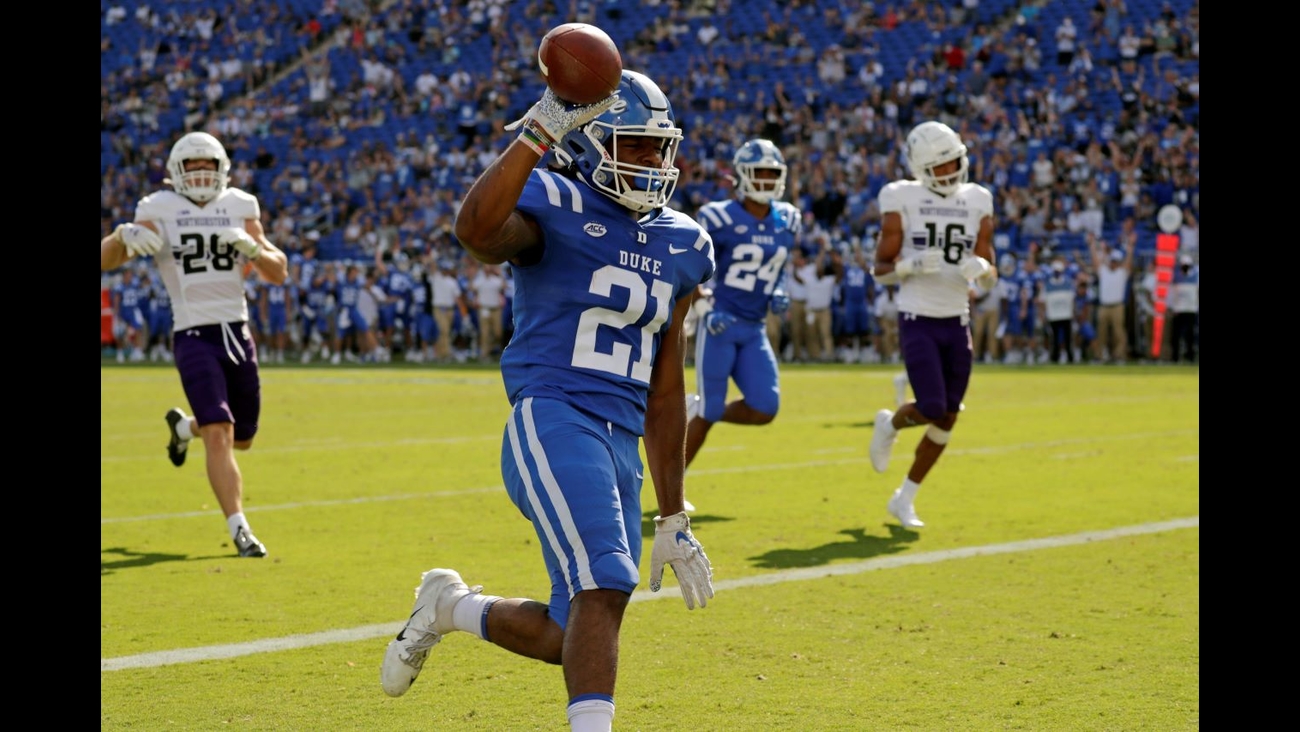 Duke running back Mataeo Durant celebrates as he runs for a touchdown against Northwestern defenders on Saturday in Durham. (Chris Seward)

DURHAM, N.C. -- Duke scored three touchdowns in the first quarter and did all its scoring in the first half, then held off a Northwestern comeback to earn a 30-23 win in a non-conference game Saturday.

The Blue Devils were efficient on both sides of the ball early on, scoring on six of their first eight possessions behind Gunnar Holmberg, who completed 31 of 44 passes for a career-high 314 yards and a touchdown.

"Gunnar is playing pretty dang well. Gunnar wants to win, and Gunnar is a humble and an unselfish player," Duke coach David Cutcliffe said. "He's a good thrower. But also, Northwestern did crowd the line of scrimmage. There's no reason to be hard-headed."

Meanwhile, the Blue Devils' defense forced Northwestern (1-2) into a punt or a turnover on its first seven drives.

The Wildcats didn't score until late in the second quarter, following a change at quarterback. Starter Hunter Johnson threw three interceptions and was relieved by Andrew Marty, who orchestrated a quick scoring drive that covered 75 yards in just six plays.

Northwestern mustered two more touchdown drives, but never quite caught up with Duke (2-1). Marty seemed to be scampering toward another score in the fourth quarter, but had the ball stripped away from him by Duke's Dewayne Carter on a play that Cutcliffe called "momentum-swinging."

"That's one of the first plays I talked about in the locker room," Cutcliffe said. "Just an amazing effort play. That's what a captain does. Dewayne stepped up in a huge way."

Marty was injured on the play and was replaced by South Carolina transfer Ryan Hilinski.

Despite fumbling twice, Mateo Durant ran for 143 yards for Duke and notched his third straight multi-touchdown game. Jake Bobo notched career-bests in catches and yardage, hauling in 11 of Holmberg's attempts for 109 yards.

The potency of the Blue Devils' attack dwindled in the second half as they were outscored 16-0, but the cushion Duke built for itself was enough to keep the Wildcats away. Defensively, Duke did something it hadn't done in seven years by forcing five turnovers. The last time the Blue Devils had that many takeaways was Sept. 20, 2014, against Tulane.