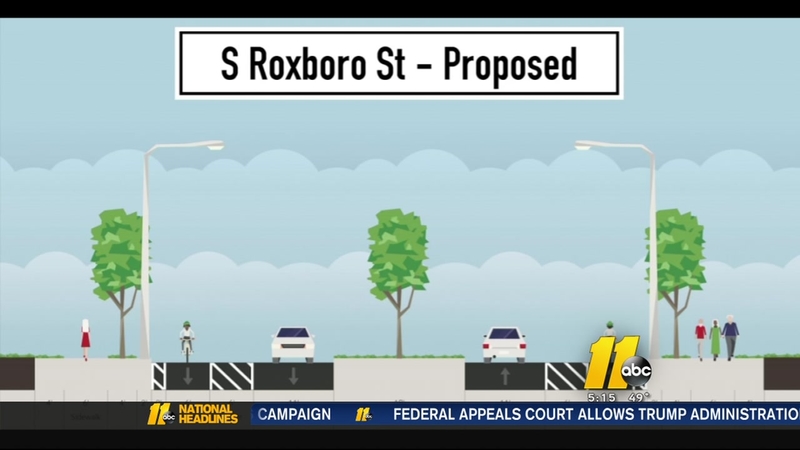 DURHAM, North Carolina (WTVD) -- Next year, a one-mile stretch of South Roxboro Street in Durham will be reduced from four lanes to two - with bicycle lanes on each side.

Neighbors asked the city leaders to make the section of road safer for pedestrians and cyclists.

Travis Clarke lives in the neighborhood. He couldn't be more excited about the pedestrian-friendly upgrades. Clarke and his wife enjoy bike riding, and Clarke even builds bikes in his spare time.

He said a designated bike lane is necessary.

"Because right now, most people bike on the sidewalk. It's a pretty dangerous road. A lot of traffic in the morning," Clarke said.

The plan to add bike lanes is part of the City's overall strategy that includes repaving and striping S. Roxboro Street between Hope Valley Road and Juliette Drive.

The city said reducing the lanes with bike lanes can be a trigger for drivers to commute at slower speeds.

On average, the city says drivers go 42 mph in this 35 mph speed zone.

"It has been a lot of wrecks out here in the neighborhood right in front of my house," Clarke said.

City traffic experts said there were 48 crashes in the area in a five-year span.

Nine of them were likely related to speed.

The city would like neighbors' feedback on this plan. Residents have until November 30 to submit a response.

ABC11 has decided to slowly reduce the number of stories on the website that have a comments section. We believe very strongly that our audience should have an opportunity to discuss and debate events in our world, however, we have not been able to moderate the comments as well as we would like. Instead of hosting a platform that could allow a few loud and ugly voices to dominate a conversation, we want to encourage everyone to join us on our social media platforms and speak out there. Facebook: facebook.com/ABC11 Twitter: twitter.com/ABC11_WTVD
Report a correction or typo
Related topics:
trafficdurhamdurham countybike lanestrafficdurham county news
Copyright © 2022 WTVD-TV. All Rights Reserved.
TOP STORIES
Light snow expected this weekend, black ice possible
Triangle group Ukrainians in Carolina hold fundraiser in Raleigh
Supersonic jet startup Boom to open factory in NC
Triangle contractor going to prison, must repay $4M
Justice Anita Earls listed as candidate for US Supreme Court
NCDOT, local Food bank preparing for possible winter weather
How to store and care for KN95 and N95 masks
Show More
NCDHHS tool highlights how childcare woes pre-date pandemic
Number of people of color seeking mental health care rises
US Marshals Service share details into solving years-long cold case
Maintenance orders pile up at Raleigh Housing Authority
LATEST: Wake County reduces COVID-19 testing hours
More TOP STORIES News