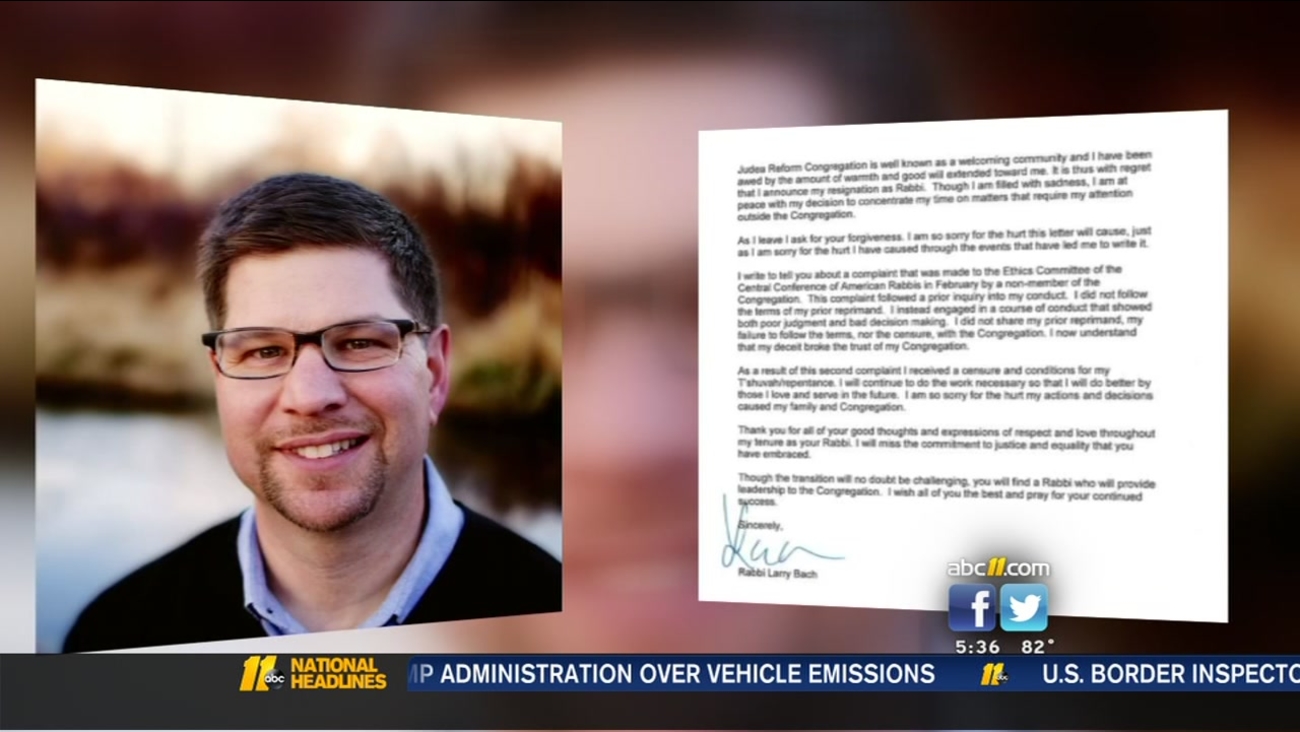 This is the second complaint against Rabbi Larry Bach (WTVD)

DURHAM, N.C. (WTVD) -- A Durham rabbi has resigned following a complaint of a sexual nature, according to an attorney representing Judea Reform Congregation.

This is the second complaint against Rabbi Larry Bach over his career. Back in 2014, prior to joining Judea Reform Congregation, Bach was reprimanded by the Central Conference of American Rabbis.

In a letter to the Judea Reform Congregation, Rabbi Bach admitted that he did not follow the terms of his prior reprimand. He also said the complaint was made by a non-member of the congregation.

He wrote, in part:

I write to tell you about a complaint that was made to the Ethics Committee of the Central Conference of American Rabbis in February by a non-member of the Congregation. This complaint followed a prior inquiry into my conduct. I did not follow the terms of my prior reprimand. I instead engaged in a course of conduct that showed both poor judgment and decision making. I did not share my prior reprimand, my faillure to follow the terms nor the censure with the Congregation. I now understand that my deceit broke the trust of my Congregation."

According to their website, Judea Reform caters to over 630 households.

Rabbi Emeritus John S. Friedman, who previously served as Rabbi for Judea Reform Congregation acknowledged the difficult moment, but described leadership as "great," the program as "strong," and pledged the congregation will "continue to grow and prosper and do all the things that a Jewish congregation should do."

In a statement, Rabbi Steven A. Fox, Chief Executive Officer of CCAR wrote:

The CCAR remains committed to ensuring sacred and safe communities and rabbis who live up to the highest moral values. Rabbi Larry Bach previously informed his congregation about a Reprimand that occurred in early 2014. Reprimands are issued by CCAR for minor infractions and are not publicly disclosed, per the CCAR Code of Ethics. With regard to the pending complaint, which Rabbi Bach has also publicly disclosed to the congregation, the investigation is ongoing and there has not yet been a final adjudication. The outcome of the final adjudication will determine the extent of public disclosure. As part of the investigation, we are committed to engaging with the leadership of Judea Reform Congregation.

NOTE: The "congregation" mentioned in the statement from the CCAR is not the Judea Reform Congregation.