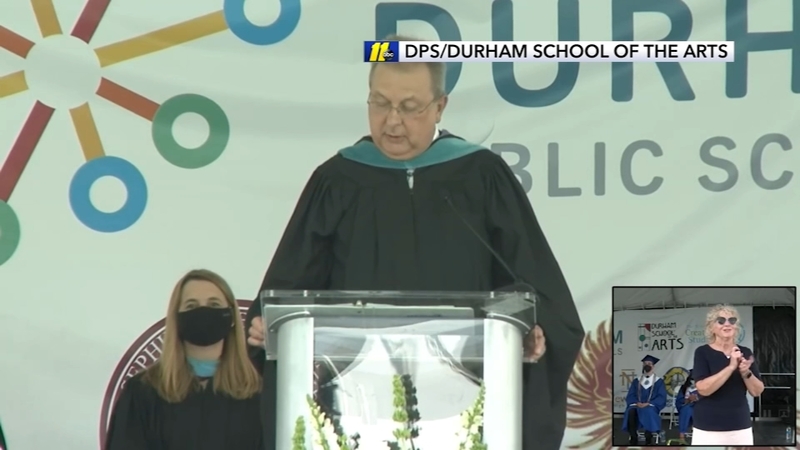 Parents shocked after board decides to oust popular Durham principal

DURHAM, N.C. (WTVD) -- Students and parents at one of the best public schools in Durham were in shock Tuesday night.

A popular, long-time principal of the Durham School of the Arts will be out of a job by the end of the month. School families are demanding to know why -- and pledging to fight back.

Parents said everything seemed normal at the Durham School of the Arts graduation ceremony last Friday: Smiling families, happy graduates and DSA's beloved principal David Hawks was presiding over all of it

"When the page turns, one part of your life is concluding but the next major part is just beginning," Hawks told the graduates.

"I was summoned to (DPS) central office for a meeting where (Durham Superintendent) Pascal Mubenga told me that a majority of the board of education had decided not to offer me another contract even though he had recommended that I be given another contract," Hawks wrote. "Wednesday, June 30 will be my last day as principal... This was not my choice of how we would end our time together."

"We are just shocked! Mr. Hawks is an excellent principal," said DSA parent Karen Bledsoe, whose 16-year-old daughter, Olivia, is a rising junior at the school.

"I couldn't believe that they did this because he was a fantastic principal," Olivia said.

DSA has seen tremendous success during Hawks' 14 years at the helm: U.S. News and World Report ranks the magnet school as one of the best in the nation; Number 30 in North Carolina.

David Hawks, the beloved principal of one of the most high-achieving public schools in the state, will be out of a job by the end of the month • AT 11 • The contentious decision to not renew Hawks’ contract at the Durham School of the Arts. #abc11 pic.twitter.com/QnhzXOYngL

When disaster struck in 2019 in a deadly gas explosion that struck just across the street -- It was Hawks in charge of keeping students safe.

"All the students were in danger. Who knew where the next gas line was going to blow. He kept students safe," Karen Bledsoe said. "He's always been a great communicator."

Superintendent Mubenga, who by Hawks' account to parents was overruled by the school board and was forced to let Hawks go, told ABC11: "I'm grateful to Principal Hawks for his years of leadership... We will conduct a thorough search for the next principal, with robust participation from DSA staff and families."

Mubenga added that Hawks "has worked with DSA's teachers, staff, and administrators to unlock the limitless artistic potential of students, and he has fostered strong partnerships with Durham's arts community."

ABC11 reached out to DPS School Board Chair Bettina Umstead, who said she could not respond to questions about individual personnel matters. Umstead pledged to work with the community to find a new leader.

The next school board is on Thursday and from what parents and students are saying, the board will get an earful from DSA families trying to change the board's minds.

"I would like the school board to listen to Dr. Mubenga," said Karen Bledsoe. "They need to put the DSA students first. They need to revisit this decision quickly because this contract is up by the end of the month."