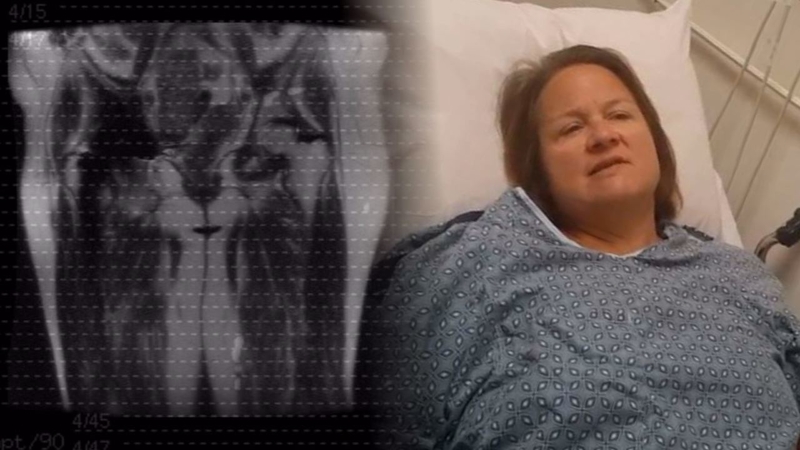 DURHAM, N.C. (WTVD) -- It was supposed to be a surgery that would give Durham resident Juliana LaDue more mobility and get her back to being an active mom and wife.

Instead, she said the hip replacement surgery changed her life forever.

"Two little parts destroyed my life, about killed me," she said. 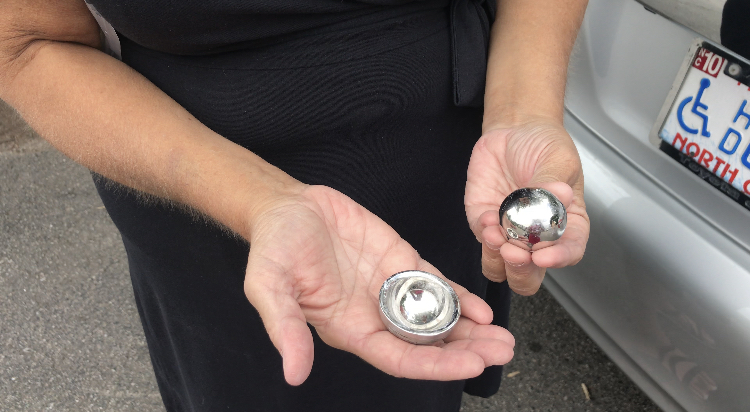 Juliana is referring to two small metal parts. They were implanted in her body in 2003 when she was just 36 years old after she says her doctor told her about a new hip replacement surgery.

Juliana needed the surgery because she was born with a congenital defect where her hip socket was in the wrong placement.

She went for what's known as the Pinnacle metal on metal hip implant by DePuy, which is part of the Johnson and Johnson Family.

She recovered from the surgery, but she says she began to have problems.

"My hair had been falling out; my nails had been tearing. I knew I didn't feel well, just tired all of the time," Juliana said.

She said doctors originally thought she had pneumonia until blood tests confirmed metal poisoning. Her chromium and cobalt levels nearly a hundred times the standard range. Then there was an even more serious problem, this time affecting her heart.

"Cardiomyopathy due to metal poisoning," she said. "My heart is permanently damaged."

It caused so much damage, Juliana now has a defibrillator after she says she suffers from congestive heart failure. She says all of her health problems that are related to her hip replacement surgery cost her and her family so much.

"We lost a house, my career, my husband has lost so much, and my children are damaged," she said. "My kids have a game plan how to call the ambulance."

After suffering from several medical issues, in 2016, thirteen years after the metal hip implant, Juliana went back under the knife and had her metal hip removed.

"Even though the hip is out of me the cardiomyopathy does not end," she said. "There is still enough metal in there that has caused damage; the damage is done."

Juliana is not alone when it comes to suffering from her metal hip. DePuy, the maker of the metal hips, have come under fire for these devices. KABC documented how the Pinnacle hip implant racked up enormous profits for DePuy and became known as the company's "Billion Dollar Baby," before the metal-on-metal version was taken off the market in 2013.

Their investigation revealed this artificial hip was not tested in humans before it was sold and surgically implanted into about 150,000 Americans. Juliana says she didn't know that when she agreed to have the metal hip implant surgery in 2003.

DePuy lost several civil cases where juries awarded Pinnacle hip patients millions after they accused the company of misleading them about the devices health risks and durability. Some of those awards were cut while others were thrown out on appeal. In January of this year, Johnson and Johnson DePuy agreed to pay $120 million to resolve state attorneys general claims of deceptive marketing in metal-on-metal hip implants.

In 2017, Juliana filed suit against Johnson and Johnson DePuy alleging negligence. She said that the implants were defective and that the company didn't do enough testing on the implants to know the complications.

Thousands of other patients who had the Pinnacle hip replacement with the all-metal Ultamet liner also filed suit against Johnson and Johnson DePuy with similar accusations.

Now, years after the attorney's first filing, Juliana provided to us what her attorney was calling a "group settlement." As part of the proposal Juliana provided to us, claimants could get $100,000 all the way up to $250,000 depending on what metal implant they had and how many of the metal parts they had to have removed. Juliana adds, "My medical bills have been in the millions.

As part of the proposal, Juliana would qualify for $100,000 but says she would not get most of that because, according to the proposal, her medical debt owed to providers would be paid first with that $100,000.

The proposal does state that DePuy has agreed the patient would get no less than $20,000.

"A billion dollar case puts $20,000 in my pocket, how can they get away with this?" she asked. "This is the part they know what has caused me to be dying. My medical bills have been in the millions."

In May, Juliana told me she would not take part in that proposal.

As for Johnson and Johnson DePuy, a company representative said they can't comment on Juliana's case or any settlement discussions, but added:
"We empathize with any patient who has experienced a medical complication. Unfortunately, hip replacements, just like natural hips, are not perfect, and every surgery and implanted medical device poses potential risks and complications. When surfaces of a hip replacement rub against each other, there are changes happening at a microscopic level, including tiny particles wearing away. No matter what materials are used, these implants experience wear over time and generate what are called wear particles that are released into the area surrounding the implant. For most patients, the body's natural defenses harmlessly respond to the particles by isolating or eliminating them from the body. For some, the wear particles might cause a reaction that results in symptoms in the area surrounding an implant, such as fluid buildup or tissue damage. This is a known complication of metal-on-metal hip implants that is included in the product labeling provided to surgeons with the implant. In these cases, further surgery can be required. This is true for all types of implants, regardless of the materials from which they are made. Health effects in parts of the body other than the hip joint have rarely been reported in metal-on-metal hip implant patients."

When it comes to Juliana, after we contacted Johnson and Johnson DePuy, her attorney says the company reached back out and all parties reached a deal.

Besides money, many who had these metal implants are pushing for tougher laws and regulations when it comes to metal implants. They say they want more oversight and scrutiny by the FDA if you can believe it, the FDA does not require the same standard for medical devices as it does prescription drugs. While drugs have to undergo human trials, medical devices do not.

Former WTVD anchor Frances Scott brought to light the lack of FDA oversight when it comes to devices implanted in humans after having a double hip replacement with DePuy's metal hips. She suffered several medical complications she says were due to the metal hips and is now pushing politicians to change laws regarded implanted medical devices.

DePuy also provided this information to us about the metal-on-metal implants:
Modern metal-on-metal hip implants had been used in Europe with excellent results since 1988 and were first cleared for sale in the U.S. by the FDA in 1999. Before any individual manufacturer (including DePuy) could begin selling a metal-on-metal hip, as part of the 510(k) process the FDA required the manufacturer to provide clinical data supporting the safety and efficacy of its own initial metal-on-metal device, which we submitted to the FDA.

DePuy's metal-on-metal hips were designed and developed in conjunction with experienced orthopaedic surgeons and leaders in the biomedical field as an additional option for surgeons in treating patients suffering from severe and disabling arthritis and other diseases of the hip joint. They were intended to respond to a clinical need for a hip bearing surface that reduced the risk of dislocation and was more durable than the polyethylene available during most of the 1990s. Surgeons, scientists, engineers and academics drew on years of experience in developing a new generation of metal-on-metal bearings.

ULTAMET Metal-on-Metal Articulation was based on dozens of tests to better understand how the implant would wear, the implant's strength, and other important performance characteristics. ULTAMET Metal-on-Metal was also used in two FDA-supervised clinical studies for other products that went through the pre-market approval (PMA) process and ULTAMET demonstrated excellent results in both clinical studies. Thousands of patients have benefited from having metal-on-metal hip replacements and continue after ten years or more to enjoy increased mobility and relief from pain.

After ULTAMET and other metal-on-metal bearings were introduced, bearing technology continued to advance and physician preferences shifted toward newer polyethylenes that were available in the 2000s and to ceramic-on-ceramic bearing combinations. As a result, ULTAMET Metal-on-Metal was discontinued in 2013 based on low demand for the product, the availability of alternative options that meet the clinical needs of patients and a proposed change in FDA regulation of all metal-on-metal total hip replacement products. The decision to discontinue ULTAMET Metal-on-Metal was not related to safety or efficacy.
Report a correction or typo
Related topics:
health & fitnessdurhamhealthtroubleshootersurgeryconsumer concerns
Copyright © 2021 WTVD-TV. All Rights Reserved.
TROUBLESHOOTER
Watch out for scammers posing as your favorite Instagram accounts
Troubleshooter helps worker told she'd have to pay back $8k in unemployment
Durham couple charged for COVID test: How to avoid it happening to you
Don't fall for these scam voicemails trying to trick you out of money
TOP STORIES
Is $1M incentive upping COVID vaccinations? It's too early to tell
2 Bragg paratroopers found dead in barracks over the weekend
Tropical depression forms off NC coast
First Alert to Hurricane Season: Virtual Roundtable
Durham company's lung imaging could help long-haul COVID patients
Girl, 15, killed by lightning strike at beach while swimming on vacation
Teen gets associate's degree, IT certificate before HS graduation
Show More
'DEFUND' to be removed from in front of Durham police headquarters
4 mass shootings in 6 hours leave 38 wounded, 6 dead
Biden reaffirms US 'sacred' commitment to NATO
Another member of prominent South Carolina legal family dies
IRS says it's working 'as fast as possible' after tax refund delays
More TOP STORIES News