ECU swim community not letting program go down without a fight 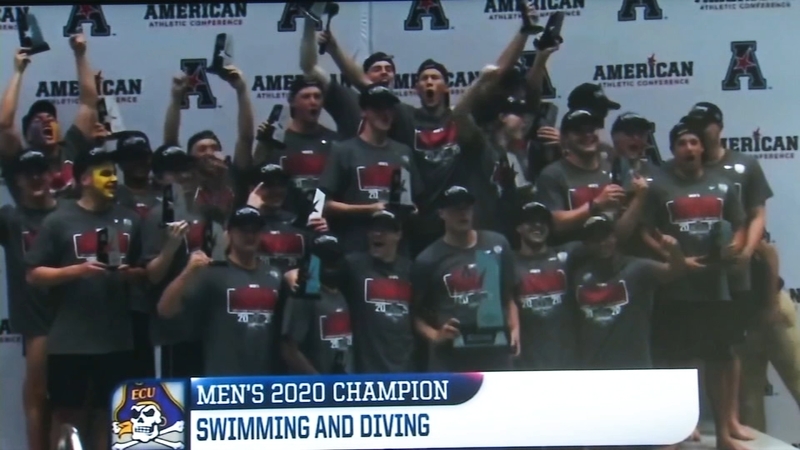 Those happy heights soon turned horrible when ECU announced that it was cutting the sport because of budget shortfalls. 66 years and 21 titles gone just like that.

"You know, I thought that as time would go by that I would maybe feel not necessarily differently, but I wouldn't be as angry as I was six weeks ago, but I honestly feel exactly the same as I did," former Pirate swimmer and longtime assistant coach Kate Moore told ABC11.

Moore has given her adult life to the Pirate swimming program and she's not willing to let it disappear without a fight. She's one of the organizers behind the "Save ECU Swimming and Diving" campaign, a multiplatform pledge drive that has raised almost $700,000 to date.

"One of our goals is to continue to get the story out and to make sure that people know that we're still here and still trying really hard," Moore said.

"That's the thing about Pirate Nation, we don't we don't go down without a fight" said rising junior Ryan Brennan, "It was just, we've got to act quickly, act fast. Let's try to save this."

Brennan finished his sophomore season with a conference title. The New Jersey native told ABC11 that he's likely to stay in Greenville after initially entering the transfer portal. Such are the bonds he's built.

"The friends that I made through swim team are the greatest people I've met in my life and I just can't see myself living away from them and swimming for another team," he said. "Different colors and different uniforms."

ABC11 reached out to ECU, which did not want to comment.

For Moore and Brennan and so many others, it's personal. They feel they are at the very least owed a meeting with the athletic director and interim chancellor and a detailed explanation why one of the school's most decorated programs had to be axed.

"They're going to look us in the eye and say all right, this is why we had to do this and lay out their reasons and either we can come to a solution, or we don't, but I think we deserve at least a sit-down meeting" Brennan said.

"We all paid to go to ECU," she said. "So, for them to, especially the Chancellor, to not, not even entertain talking to us, not with just a letter but to actually talk to us is disappointing."