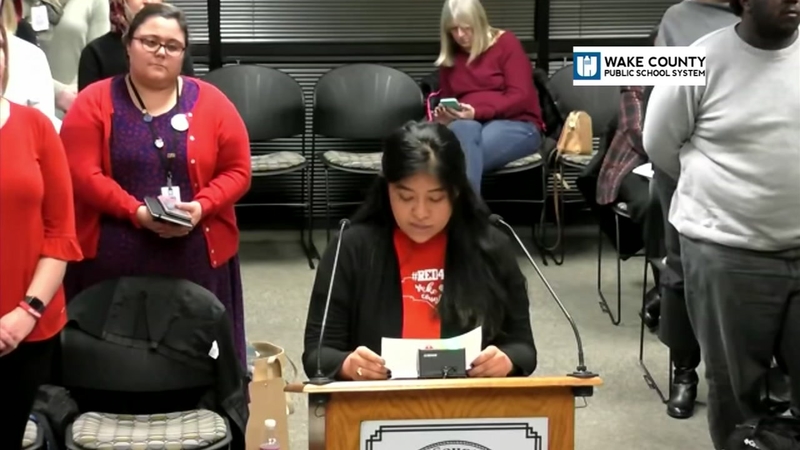 This comes after U.S. Immigration and Customs Enforcement announced recently that they arrested 200 undocumented immigrants in raids across North Carolina earlier this month.

"It is becoming increasingly clear that now is the time for all levels of leadership and policy to take action to support all of North Carolina's young people regardless of immigration status," said Danica Lee, of North Carolina Asian Americans Together, at the district's board meeting Tuesday. "No one in this country should be afraid to pursue their right to an education."

Maria, who only wants to use her first name, is undocumented and has four children who go to schools in the Wake County Public School System.

Her 13-year-old daughter, who only wants to use her middle name, Itzel, said that when she's at school, she worries about her mom.

"Her getting deported and arrested by ICE," Itzel said. "It's kind of stressful sometimes, thinking about how I could lose her like that."

Maria said in Spanish that the resolution would make her feel safer when she goes to her children's school events. Itzel, who is in the country legally, agrees.

"I would be sure that not just my mom but other people, too, can also be protected and they don't have to worry about their parents not being able to stay or students or kids getting arrested for not having documents," Itzel said.

"We want you to assure our immigrant families that schools are a safe place and a sanctuary for them," Martinez said at the meeting. "Not even their apartments or their houses are any longer safe for them. ICE is terrorizing our communities."

Martinez also told ABC11 that, "It's a statement, the public statement in which school leaders will assure our communities that they got their back. "That's what we want. We want a public statement, an assurance they are going to do everything in their power to protect undocumented students."

America Moreno Jimenez, a teacher at Sanderson High School in Raleigh, is asking the district to change Policy Code 5120 about the district's relationship with law enforcement to better protect undocumented students.

"We have made promises to ourselves and to the public education profession to teach all of the students who sit in our classrooms, as well as to teach those who will be absent in the coming weeks out of fear," Jimenez said. "Fear that they won't see their parents when they get home, fear that they'll be rounded up at the bus stop, fear that their dad will be arrested in a carpool line. Who can think about homework when fear hangs over them?"

The ICE policy states enforcement actions are not to occur at or be focused on sensitive locations such as schools and places of worship unless exigent circumstances exist:

"The Board has not determined whether or not it would be helpful to issue a formal statement on immigration," Jim Martin, Chair of the WCPSS Board of Education, told ABC11. "Our primary focus is on student safety, and we also recognize that the safety of families directly impacts students ability to learn. Thus, we have been careful to ensure that our policies and practice protect students in keeping the Supreme Court ruling in Plyer vs. Doe.

"In particular, the Supreme Court concluded that that all persons in the United States, including undocumented aliens, are entitled to equal protection of the laws and that denying a free public education to undocumented students would impose a "lifetime hardship" on "innocent children" that is not justified by any substantial state or federal interest," Martin added. "School system leadership again will be providing the guidance, developed for school leadership in 2017, that clearly outlines our policies and actions schools should take should anyone confront schools on immigration issues."