COVID-19 transformed the workplace: Are colleges and universities next? 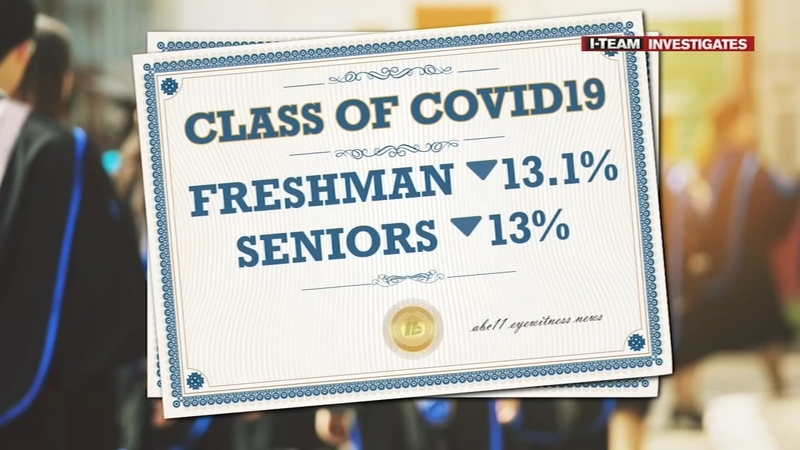 COVID-19 changed the workplace: Are colleges and universities next?

You're well on your way to -- well, no one is really sure what even next year will bring.

"I was worried about it even as a freshman," Jillian Seversky, a graduating senior at Holly Springs High School, told ABC11 of her college application process. "I should've been having fun."

Seversky shouldn't have been that worried; her good grades and her talented artwork earned her a special moment this spring when she got into her dream school, New York University.

"I clicked on the computer and I had to read the letter two or three times. I thought they made a mistake," Seversky said. "The programs are amazing, and the city is just phenomenal."

The dream, though, quickly fading and overshadowed by the nightmare of how to pay for it.

And no guarantee there won't be any COVID-19-related restrictions, either.

"It doesn't make any sense. They're charging the same price for online classes? So it was either go into debt and pay that off for the rest of my life or not go. I just had to make a choice."

Seversky has instead chosen to attend Appalachian State -- still a very fine choice -- but her predicament and frustration underscores what might be a turning point for higher eduction. Just as the pandemic changed how Americans approached work, colleges and universities might also need to get with the program.

According to the National Student Clearinghouse Research Center, enrollments in all post-secondary education declined 2.5 percent in fall 2020, nearly double the rate a year earlier. For undergraduate studies specifically, enrollment dropped 3.6% - 560,000 students. A study from the federal government is also showing similar trends.

While the drops were most notable in the public two-year sector, which suffered the most from enrollment decline this fall while all other major institutional sectors had more positive enrollment outcomes than they did last fall. Public college enrollment (two-year and four-year combined), which enrolls 7 out of 10 postsecondary students, declined by 4 percent or nearly 530,000 students this fall, mainly because of decreases at public two-year institutions.

Analysts at the Research Center called the findings "unprecedented," including a 13.1% percent decrease in freshman enrollment, while 13% of seniors delayed graduation.

Though all sectors and all majors were affected, none suffered more than public two-year college programs, including Wake County Technical University (Wake Tech), which reported 31% of students withdrawing from at least one course and 10% of students totally withdrawing.

President Scott Ralls, who was called to testify before a Congressional committee about the issue, told ABC11 that the enrollment declines again exemplified the pandemic's disproportionate affect on lower-income and marginalized communities.

"Particularly African-American males, we saw greater withdrawal rates and so that gave us pause and concern," Ralls explained. "We know that students who face greater economic challenges are also non-traditional students. They were parents teaching at home or had work while going to school, or they had to take an extra job because someone might have lost their job early on."

"When they're here, they have to feel us rallying around them," he said.

The news isn't all grim, as Wake Tech is reporting a 9% increase in applications for the summer semester. UNC and Duke, meanwhile, are touting record applications as well for the next year.

As for Seversky, she has her own message for incoming high school seniors: "It matters that you get the degree, not who it's from."
Report a correction or typo
Related topics:
educationraleighncdurhambooneeducationcollegei teamcovid 19 pandemicstudents
Copyright © 2021 WTVD-TV. All Rights Reserved.
I-TEAM
Despite incentives, fewer North Carolinians vaccinated each week
NC lawmakers consider bills that would make changes to elections
IRS says it's working 'as fast as possible' after tax refund delays
As COVID-19 cases creep up in some states, NC trends remain steady
TOP STORIES
2 dead in head-on crash on Jones Sausage Road near Garner
4 dead, 159 remain missing after Florida building collapse
Family of missing NC woman begs her husband to speak up
How much could you receive under the new child tax credit?
Derek Chauvin could face decadeslong sentence in George Floyd's murder
UNC students to protest Friday for Nikole Hannah-Jones
'Scary five seconds': Couple recounts bobcat attack
Show More
In Raleigh, Biden encourages vaccinations, warns about Delta variant
Expert weighs in on possible cause of Florida building collapse
LATEST: Flight Day returns to Dix Park
Pet Alert: As dogs roam the yards, snakes may be lurking
Older North Carolinians encourage everyone to get COVID-19 vaccine
More TOP STORIES News