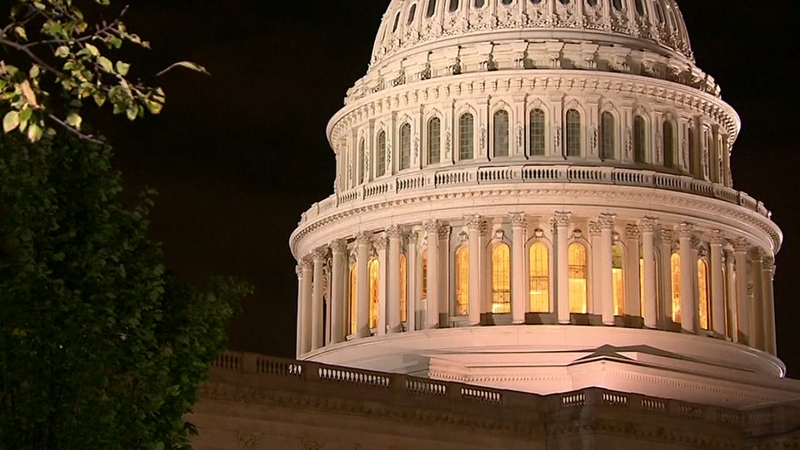 Democrats gain control of House but Republicans cling to Senate

After two years of Republicans being in complete control, Congress is once again split in the Capitol.

Democrats will take back control of the House of Representatives for the first time in eight years, but Republicans held their Senate majority as voters rendered a mixed verdict in the first nationwide election of Donald Trump's turbulent presidency.

Poll results are still coming in but the Democrats picked up more than the 27 seats they would need to take control of the House of Representatives.

It was a historic night for women in the House of Representatives, as more than 100 won their races. The previous record was 84.

It was also a historic night for first-time female candidates, with several political newbies flipping GOP-held congressional seats, according to ABC News' analysis.

Perhaps the biggest new political star among them is New York's 29-year-old Alexandria Ocasio-Cortez, a liberal firebrand from the Bronx. Also among them are the first two Native American women elected to the House - Democrats Sharice Davids of Kansas and Deb Haaland of New Mexico - and the first two Muslim-American women, Rhasida Tlaib of Michigan and Minnesota's Ilhan Oman.

Despite major victories in the House, other results allowed room for the GOP to also call the night a success. The results highlighted an extraordinary realignment of U.S. voters by race, sex, and education. Republicans maintained their strength in conservative, rural states, while Democrats made inroads across America's suburbs.

Tremendous success tonight. Thank you to all!

OTHER MIDTERM ELECTIONS COVERAGE:
Who should recount elections: people ... or machines?
How this year's election results could set up the 2020 races
Why do we have midterm elections between presidential election years?

Ending eight years of Republican control that began with the tea party revolt of 2010, Democrats picked off more than two dozen GOP-held districts in suburbs across the nation on the way to securing the 218 seats needed for a majority.

As of early Wednesday, two dozen races had yet to be decided, meaning the tally could grow slightly larger. But the final count is likely to leave Democrats with a narrow majority that could be difficult to manage and preserve.

Democratic Leader Nancy Pelosi, who is seeking to reclaim the gavel as House speaker, called it a "new day in America."

She saluted "those dynamic, diverse and incredible candidates who have taken back the House for the American people."

Pelosi's spokesman Drew Hammill said Trump called Pelosi to congratulate her and to note her tone of bipartisanship.

With the Republicans keeping control of the Senate, the outcome in the House could mean gridlock for Trump's agenda on Capitol Hill - or, conversely, it could open a new era of deal-making.

As the majority party, the Democrats will chair important committees and will have expansive powers to investigate the president, his business dealings and the inner workings of his administration, including whether anyone from the Trump campaign colluded with the Russians to influence the 2016 presidential election.

They will have authority to request Trump's tax returns and subpoena power to obtain documents, emails and testimony.

However, any attempt to impeach Trump is likely to run headlong into resistance in the GOP-controlled Senate.

Pelosi, meanwhile, is likely to face a challenge for the speakership from newer or younger members later this month. And the Democrats could see a struggle inside the party over how aggressively to confront the Trump administration.

During the campaign, Pelosi urged candidates to focus on lowering health care costs and creating jobs with infrastructure investment, and she tamped down calls for impeachment.

Midterm elections are typically difficult for the party in power--with 2002 being the last time the party in power gained seats in the Senate--but the GOP's hold on power was further weakened by an unusually large number of retirements as well as infighting between conservatives and centrists over their allegiance to Trump.

The Democrats, in turn, benefited from extraordinary voter enthusiasm, robust fundraising and unusually fresh candidates. More women than ever were running, along with veterans and minorities, many of them motivated by revulsion over Trump.

The results were mixed deeper into Trump country.

In Kansas, Democrat Sharice Davids beat a GOP incumbent to become the first Native American and gay woman elected to the House. But in Kentucky, one of the top Democratic recruits, retired Marine fighter pilot Amy McGrath, lost her bid to oust to three-term Rep. Andy Barr.

Trump sought to take credit for retaining the GOP's Senate majority, even as the party's foothold in the more competitive House battlefield appeared to be slipping.

Nearly 40 percent of voters cast their ballots to express opposition to the president, according to AP VoteCast, the national survey of the electorate, while one-in-four said they voted to express support for Trump.

Overall, 6 in 10 voters said the country was headed in the wrong direction, but roughly that same number described the national economy as excellent or good. Twenty-five percent described health care and immigration as the most important issues in the election.

Nearly two-thirds said Trump was a reason for their vote.

Trump encouraged voters to view the first nationwide election of his presidency as a referendum on his leadership, pointing proudly to the surging economy at recent rallies.
He bet big on a xenophobic closing message, warning of an immigrant "invasion" that promised to spread violent crime and drugs across the nation. Several television networks, including the president's favorite Fox News Channel, yanked a Trump campaign advertisement off the air on the eve of the election, determining that its portrayal of a murderous immigrant went too far.

One of Trump's most vocal defenders on immigration, Kansas Secretary of State Kris Kobach, lost his bid for governor. Kobach had built a national profile as an advocate of tough immigration policies and strict voter photo ID laws. He served as vice chairman of Trump's now-defunct commission on voter fraud.

The president's current job approval, set at 40 percent by Gallup, was the lowest at this point of any first-term president in the modern era. Both Barack Obama's and Bill Clinton's numbers were 5 points higher, and both suffered major midterm losses of 63 and 54 House seats respectively.

Democrats, whose very relevance in the Trump era depended on winning at least one chamber of Congress, were laser-focused on health care as they predicted victories that would break up the GOP's monopoly in Washington and state governments.

Yet Trump's party will maintain Senate control for the next two years, at least.

In Texas, Sen Ted Cruz staved off a tough challenge from Democrat Beto O'Rourke, whose record-smashing fundraising and celebrity have set off buzz among the left that he could be a credible 2020 White House contender.

In the leadup to the election, Republicans privately expressed confidence in their narrow Senate majority but feared the House could slip away. The GOP's grip on high-profile governorships in Georgia and Wisconsin were at risk as well.

Democratic Sens. Joe Manchin in West Virginia and Tammy Baldwin in Wisconsin won re-election. And in New Jersey, Democrats re-elected embattled Sen. Bob Menendez, who, less than a year ago, stood trial for federal corruption charges. The Justice Department dropped the charges after his trial ended in a hung jury.

"Tomorrow will be a new day in America," said House Minority Leader Nancy Pelosi, who's in line to become the next House speaker should Democrats take the majority.

President Donald Trump called Pelosi as her party stood on the brink of recapturing the House of Representatives.

Health care and immigration were high on voters' minds as they cast ballots, according to a survey of the American electorate by The Associated Press. AP VoteCast also showed a majority of voters considered Trump a factor in their votes.

In the Miami area, former Clinton administration Cabinet member Donna Shalala won an open seat, while GOP Rep. Carlos Curbelo lost his bid for a third term in a nearby district.

In the suburbs outside the nation's capital, Virginia Rep. Barbara Comstock - among the most endangered GOP incumbents, branded Barbara "Trumpstock" by Democrats - lost to Jennifer Wexton, a prosecutor and state legislator.

And outside Richmond, Virginia, one-time tea party favorite Rep. Dave Brat lost to Democrat Abigail Spanberger, a former CIA operative motivated to run for office after the GOP vote to gut the Affordable Care Act. Like other Democrats across the country, Spanberger emphasized protecting people with pre-existing conditions from being denied coverage or charged more by insurers.

Pennsylvania was particularly daunting for Republicans after court-imposed redistricting and a rash of retirements put several seats in play. Democratic favorite Conor Lamb, who stunned Washington by winning a special election in the state, beat Republican Rep. Keith Rothfus in a new district. At least three other red districts flipped to blue.

In Kentucky, the heart of Trump country, one of the top Democratic recruits, retired Marine fighter pilot Amy McGrath, lost her bid to oust to three-term Rep. Andy Barr in the Lexington-area district.

Republicans had expected the GOP tax plan would be the cornerstone of their election agenda this year, but it became a potential liability in key states along the East and West coasts where residents could face higher tax bills because of limits on property and sales tax deductions.

The tax law was particularly problematic for Republicans in high-tax New Jersey, where at least three GOP-held seats flipped. The winners included Democrat Mikie Sherrill, a former Navy pilot and federal prosecutor who ran for a suburban Newark seat.

The GOP campaign committee distanced itself from eight-term Rep. Steve King of Iowa after he was accused of racism and anti-Semitism, but he won anyway.

In California, four GOP seats in the one-time Republican stronghold of Orange County were in play, along with three other seats to the north beyond Los Angeles and into the Central Valley.