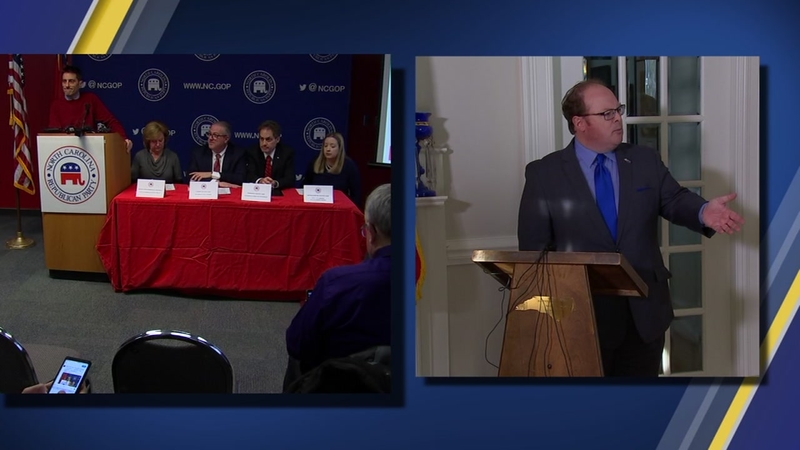 RALEIGH (WTVD) -- On the eve of the court fight about the weeks-long dispute over North Carolina's 9th Congressional District seat, the candidate leading in the vote count announced he will not be in the courtroom.

Republican Mark Harris sent a statement to say he is suffering from complications from an infection. It was Harris who filed the lawsuit in Wake County Superior Court, so his attorneys are expected to argue for the judge, Paul Ridgeway, to step in and certify the election mired in allegations of fraud.

"This is a big week for us, and I'm disappointed I can't be there in person at the hearing in Raleigh," Harris wrote. "I have full confidence in our team that will be on hand to make our case for certification."

“We wish @MarkHarrisNC9 a speedy recovery from this minor health issue. We hate that he is unable to travel to Raleigh, but we want to see him get better before going to Congress soon! The team is fully ready to push for certification tomorrow." - @ChairmanHayes #ncpol #nc09

Ahead of Tuesday's court hearing, state Republican and Democratic party leaders made their case at news conferences in Raleigh aimed at winning over the court of public opinion.

A few blocks down Hillsborough Street, Democrats at state party headquarters had a much different take on the case.

"This is nothing more than a second attempt to steal this election," said NC Democratic Party Chairman Wayne Goodwin.

Tuesday's hearing may focus heavily on McCrae Dowless, a political operative hired by the Harris campaign, who according to witnesses, collected signed absentee ballots from voters -- in violation of state law.

Before it was disbanded this month, the state board of elections was investigating Dowless' work and refused to certify Harris' 905-vote win over Democrat Dan McCready until the investigation was complete.

Harris wants the judge to certify the race now

"The state board probe is problematic and has been since day one," argued Union County GOP Chair Dan Berry.

Cumberland County GOP member Susan Mills added, "Every county in the 9th Congressional District certified Dr. Mark Harris as the winner. No public evidence has shown the outcome is in doubt."

McCready's attorneys will argue that state investigators should be allowed to continue their work when a new board of elections is seated Jan. 31; and, until then Harris should not be sent to Washington.

"(Republicans) are obstructing justice and trying to sweep under the rug systematic election fraud executed for the sole benefit of Mark Harris," said Goodwin. "It is not for the Republican Party to decide which votes count and which ones do not."

"That seat belongs to the people of NC, not Mark Harris. No amount of misleading press conferences or frivolous lawsuits can deliver that seat to him" #ncpol pic.twitter.com/4qDZBNQZ1a