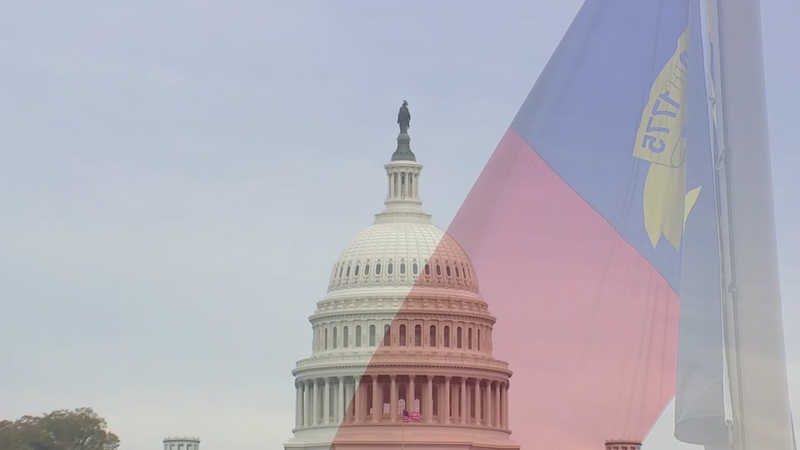 President Donald Trump will deliver his State of the Union Address before a packed U.S. Capitol albeit with one notable absence: a congressman representing North Carolina's Ninth Congressional District.

Mark Harris, the Republican candidate for the seat, continues to lead Democrat Dan McCready by about 900 votes in a race mired by allegations of voter fraud and politicization of the process.

"It's absolutely tragic," McCready told ABC11. "This is not a Democrat or Republican issue. This is about our most sacred right as Americans."

McCready has also requested subpoenas for dozens of people - including Harris, North Carolina GOP Chairman Robin Hayes, Executive Director Dallas Woodhouse, and McRae Dowless, the political operative who is at the center of the allegations of harvesting absentee ballots.

"Our right to vote is our most basic freedom as Americans," McCready says. "It's a freedom men and women have sacrificed their lives for overseas and given their lives here on the home front in civil rights. This is under attack now in North Carolina. This is something we have to get right. Our democracy depends on us that we do that."

Harris, for his part, has repeatedly sought certification of the election, including a last-ditch petition before the swearing-in of the rest of the 116th Congress in Washington on Jan. 3. A judge denied that petition on Jan. 22.

Though he vehemently denies the allegations - especially of charges he knowingly hired compromised individuals - Harris has posted a video saying he'd "wholeheartedly support" a new election *if* the investigation finds fraud could've affected the outcome of the election.

"There is simply no public evidence of anything that brings Congressman-Elect Mark Harris' victory into question," Hayes said. "He will be certified and seated because he won. His opponent is bound and determined to overrule the will of the voters."

The uncertainty surrounding the race, was widened by another controversy in the state government: who can be the legal entity to investigate the allegations, oversee the hearing, judge the evidence and rule either on certification or a new election?

Per court order -- and new state law -- North Carolina elections are managed and safeguarded by a five-member Board of Elections and a separate Board of Ethics, with all members nominated by Gov. Roy Cooper. That law, however, didn't take effect until Jan. 31.

Cooper sent letters to state leaders of both Democrats and Republicans for names to be considered for a temporary five-member Board of Elections to continue the probe into how absentee ballots were gathered, but Republicans have been quick to denounce the effort as "unconstitutional" and proclaiming they won't be "bullied" into accepting nominations to an "interim" board.

The saga about the elections board dates to 2016 when Republicans tried to reduce the governor's role in managing elections in a Special Legislative Session after Cooper's election win against incumbent Gov. Pat McCrory. Then Gov.-Elect Cooper sued and ultimately won in court -- many times -- and a GOP-sponsored constitutional amendment failed to keep the changes.

Susan Mills, a high school teacher living in Eastover, said she agrees with McCready that it is "shameful" that she's not represented in Congress yet - but she feels cheated because she voted for Mark Harris.