Some surprises in Tuesday election 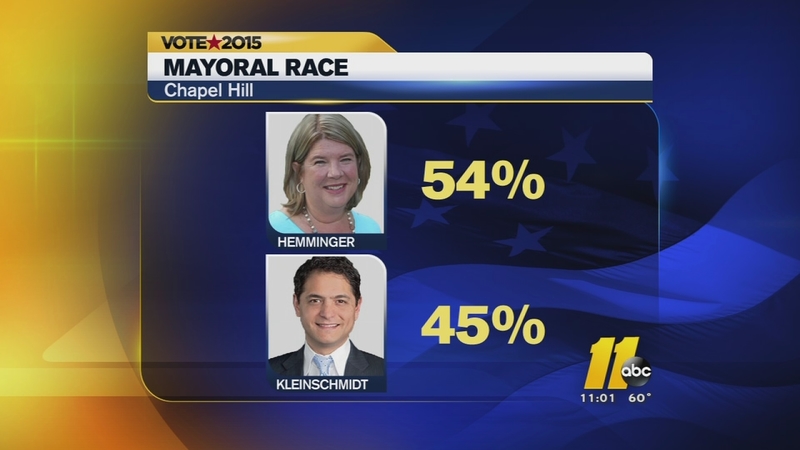 Some suprises in Tuesday election

Dickie Thompson has defeated Eddie Woodhouse in Tuesday's runoff to be representative for Raleigh City Council's District A in unofficial results.

In a statement, Woodhouse congratulated Thompson and thanked his supporters.

"3 months ago this campaign didn't exist," said Woodhouse. "In a very short time, we created an amazing campaign and successfully challenged the liberal establishment concerning Raleigh's debt, taxes and spending."

In Chapel Hill, incumbent Mark Kleinschmidt lost his bid for another term to challenger Pam Hemminger.

In Fayetteville, it was a rematch of 2013 when Nat Robertson narrowly defeated Democrat Val Applewhite to become the city's first Republican mayor since 1975. Applewhite conceded defeat just before 9:30 Tuesday night.

In an interview with ABC11, Robertson said his strong showing this go round shows voters think the city - and city council - is on the right track.

"Over the past two years we've done some great things together from building the first swimming pools since 1948 to passing the first unanimous budget in nine years," he said.

Durham Mayor Bill Bell faced challenger James Lyons, who was a distant second in the October elections when Bell got 86 percent of the vote. With the majority of precincts counted, Bell had cruised to a comfortable victory.

ABC11 will have election updates throughout the evening.