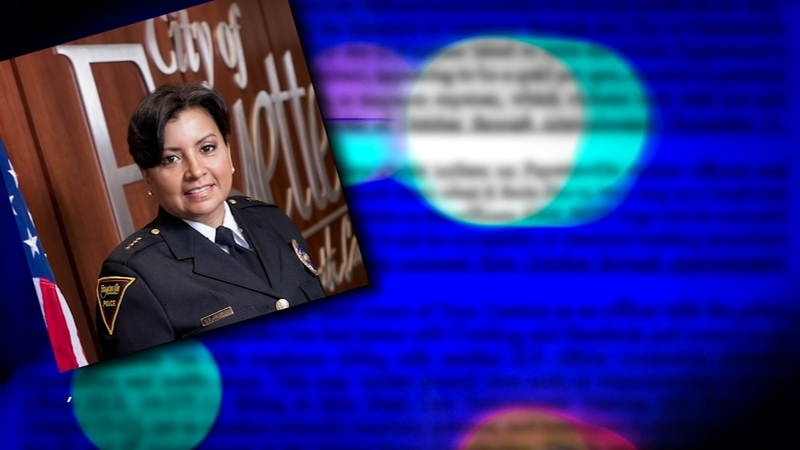 The ABC11 I-Team obtained a copy of the complaint that originally listed 14 alleged ethic violations against the city's top law enforcement figure.

Attorney Mikael Gross filed the complaint in August on behalf of employees at the Fayetteville Police Department.

"Hawkins' command staff is fearful she will retaliate if they tell the truth about her actions and the City Manager has allowed her to run roughshod over the department in a manner inconsistent with the ethics and morays (sic) we would expect of any city employee, much less the Chief of Police," Gross wrote in the August complaint.

Gross stated he was made aware of the alleged violations while representing Fayetteville police officers in disciplinary actions and grievances.

Hawkins called the complaints "extremely slanderous" to her personal integrity in a required response filed in October.

The original complaint alleges Hawkins used her patrol car for personal business, hired a gang member, issued disparate disciplinary actions based on age and race, and was stopped several times for speeding.

Many of the allegations are tied to the department's K-9 trainer. The complaint claims Hawkins had her personal dog trained by the city's K-9 trainer.

"The misuse of the contract, appearing to be a quid pro quo, resulted in personal gain for Hawkins from city contracts, at taxpayer expense, which violates both state law and City policy," the complaint stated.

Gross also claimed in the complaint that the K-9 trainer placed choke collars on officers to "teach them what it feels like to be a dog on a leash and collar."

The K-9 trainer did not complete basic training because of issues with standards and training but conducted traffic stops and criminal interdictions, which may violate laws related to impersonating an officer, according to the complaint.

Other allegations claim Hawkins retaliated against an employee who contradicted her and guided internal affairs investigations into department employees.

"Hawkins' involvement in and guidance of these investigations is unethical and shows her propensity to guide the outcome of an investigation to one she endorsed rather than one that is fair and equitable," Gross wrote in the complaint.

Another alleged violation claimed the Chief tried to have someone removed from the Fayetteville Police Benevolent Fund prior to initiating an internal investigation.

The original complaint was amended and the Ethics Commission will hear just eight of the 14 initially stated allegations.

The ABC11 I-Team also obtained a copy of Hawkins' response to the allegations. She states many of the statements are false. Specifically, she denied firing an employee for misusing city property, claimed the K-9 trainer was never hired as an officer and he did not train her dog, and that she had "no knowledge" of officers being forced to put dog collars on.

She goes on to write, it's false that she hired someone knowing they were a gang member and she denied attempting from getting anyone removed from the Fayetteville Police Benevolent Fund.

The City of Fayetteville would not confirm the complaint that the Ethics Commission will hear on Tuesday involving Hawkins. The I-Team request for the complaint from the city was denied as it did not fall in the city's public record laws.

The I-Team reached out to the Fayetteville Police Department for a comment but has not heard back.

The Ethics Commission was supposed to hear the case on Dec. 14 but it was rescheduled to Jan. 11 after one of Gross' witnesses lost his son in December.

The Fayetteville Ethics Commission will meet Tuesday and Wednesday evenings. The commission is made up of five members appointed by City Council. The commission will hear the complaint and then publish findings and recommendations regarding the alleged violations against the city's ethics policy.