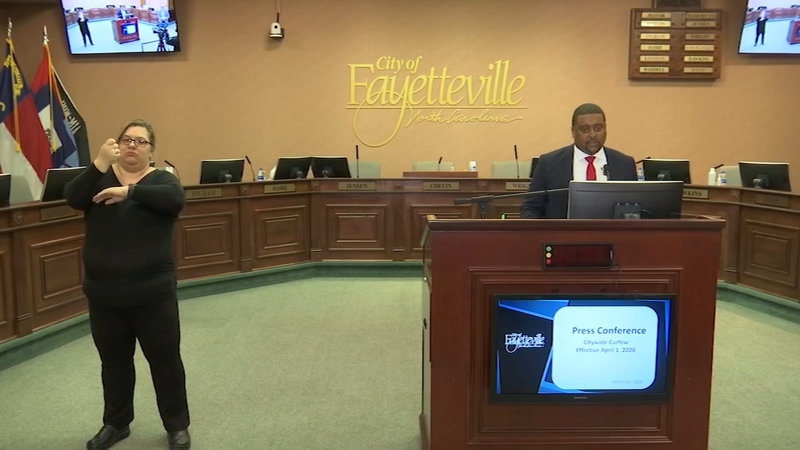 FAYETTEVILLE, N.C. (WTVD) -- The big topic of discussion across the country is how cities, counties and states will approach easing off some of the restrictions made to flatten the curve of COVID-19 cases, including the city of Fayetteville, who still has a city-wide curfew in place.

From 9 p.m. to 6 a.m., only essential workers are allowed to be out of their homes, unless that individual is getting essential items or dealing with an emergency.

It's a mandate that Councilman Johnny Dawkins, District 5, has not been fond of, calling it a little too strict.

In an official letter sent to Mayor Colvin, Dawkins highlighted the need to remove the rule and be one of the leading cities to safely re-open businesses and bring some life to this retail-based economy.

A message Dawkins echoed in a Zoom interview with ABC 11.
"Just disappoints me that we're the largest city in North Carolina with a curfew," Dawkins said.

The city is on a shortlist of places who have implemented similar curfews, including the likes of Franklin and Columbus County.

In the last three weeks, Fayetteville PD has only issued warnings, handing out around 130; but Dawkins believes it instills unnecessary fear to law-abiding citizens.
"One person said, 'Johnny, I gotta go get my son at a local grocery store here at 11 o'clock when he gets off, after he's restocked the shelf, and I'm always looking at my rear-view mirror thinking, 'Oh goodness, am I going to get pulled?'" Dawkins mentioned.

Mayor Colvin said he understands the frustration, but he wants to make sure public health is the top priority, erring on the side of caution.

AT 11: The @CityOfFayNC is one of the only major cities in the state with a curfew to combat #COVID19. Councilman Johnny Dawkins thinks its excessive and sent a letter to Mayor Mitch Colvin, encouraging him to rescind it. Hear from the councilman and mayor on @ABC11_WTVD pic.twitter.com/oDqzEPdzCQ

"Because we have fewer cases than other urban areas, I believe we are on the right path and now is not the time to change direction," Colvin said in a statement.

The mayor intends to let the curfew expire alongside Governor Roy Cooper's stay-at-home order on April 29.

As of Wednesday evening, Cumberland County officials say there have been 154 positive COVID-19 cases.