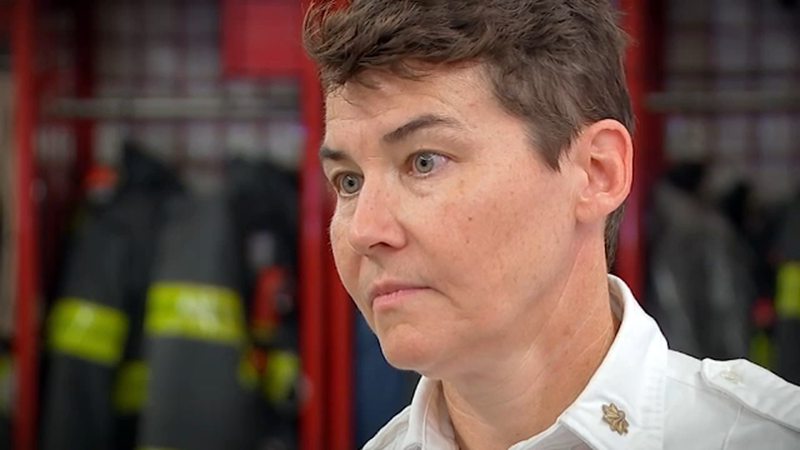 NEW YORK -- As we prepare to mark 20 years since the 9/11 terror attacks, five female members of the FDNY who continue to move forward after the trauma are speaking out.

"I don't think you can work at a New York City firehouse and not think about September 11th," FDNY Battalion Chief Michele Fitzsimmons told our sister station WABC in New York.

Fitzsimmons is the highest-ranking woman in the New York City Fire Department-who was a just probationary firefighter on 9/11. Six of her academy classmates were among the 343 firefighters killed that day.

"For me, losing the six guys from my class made me even more committed," Fitzsimmons said. "Like, they didn't get to get into the department. I felt like we had to kind of carry on their legacy."

Fitzsimmons is one of just five woman New York City firefighters who responded to the World Trade Center and are still on the job today.

Eyewitness News reporter N.J. Burkett and photographer Marty Glembotzky rushed down to the World Trade Center on September 11, 2001. While shooting a standup right below the burning towers, the first tower began to collapse.

"To see those buildings, of those sizes, just crumble the way they did was, that was shocking," said Lt. Adrienne Walsh, FDNY Rescue 1.

"You want to be with your team, you want to know where your people are, I mean, my firehouse lost 10 people that day," said Lt. Anna Schermerhorn-Collins, FDNY Engine Co 93.

They weren't on duty when the buildings were struck. But they found a way to get to Lower Manhattan.

"There were a lot of women in this department who were down there," said Lt. Tracey Lewis, FDNY Engine Co 240.

Lewis was a probationary firefighter on 9/11. Regina Wilson had actually switched shifts with another firefighter who wanted to ride with Ladder 105 that morning.

"And then the truck got dispatched to the Trade Center and then I found out later that everyone on the truck passed away," said Wilson, FDNY Engine Co 219.

Lewis lost a close family friend -- a fellow firefighter who was her brother's best friend.