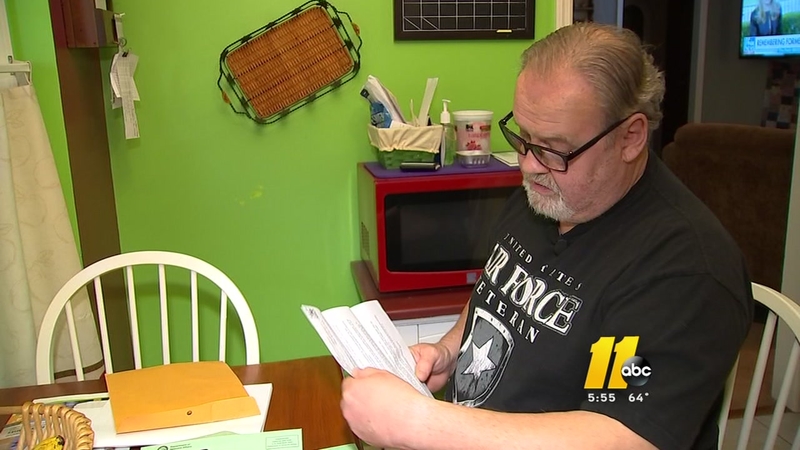 RAEFORD, NC (WTVD) -- Each month Francis McDonald relies on his disability check from the military.

He said the bills are tight and the minute the check comes in, he pays the bills. So when he got a call from the Veterans Administration letting him know there would be a problem with his latest check, he was worried.

He said the representative on the phone said, "We have reason to believe your benefits were compromised." Francis said he asked, "Does this mean I'm not going to get my check and she's like, 'yes because your check didn't go to your bank.'"

Francis McDonald called on the Troubleshooter to help with his benefit money after a security breach.

Francis said he was told someone hacked into his e-benefits account and rerouted his monthly disability check to another one.

Francis said the representative told him the investigation could take up to six weeks. Francis said his check is for more than $3,000, which he and his wife can't live without.

"I have to live on it. I have no other source of income," he said.

Francis got in touch with ABC11, and we reached out to the Department of Veterans Affairs. Within hours, Francis said he heard from the agency and had his money in his account.

"Now all of a sudden, they can't wait to give me my money. We're very thankful to you because it took a lot of pressure off of me," he said.

A representative from the Department of Veterans Affairs said they put protections in place on Francis' account to prevent further fraud. They also claim to have forwarded the case specifics to the Office of the Inspector General (OIG) for criminal prosecution.

"Veterans are the targets of many of the same types of fraud as the rest of society, including mail, telephone and online fraud," the representative said. "VA takes fraud allegations and the security of veterans' information seriously. When a fraud case is reported or suspected, VA investigates the incident and determines what actions are needed to protect the veterans' benefits, report those responsible for the alleged fraud and make the veteran whole quickly."

If you're a veteran, the Department of Veterans Affairs adds, "Safeguarding personally identifiable information (PII) is a veteran's best defense against being the victim of e-Benefits and other fraud. Veterans should never disclose their PII to an unknown third party and should regularly change their e-Benefits and other account passwords.