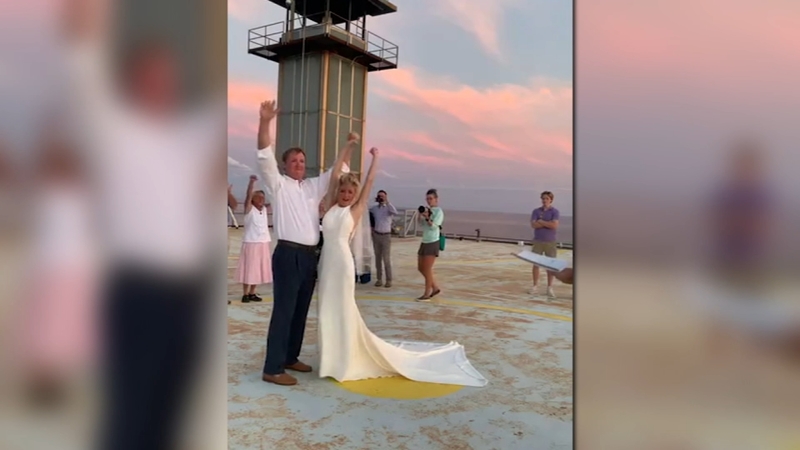 A North Carolina couple became the first to ever get married on Frying Pan Tower over the weekend.

Audrey and Ben Black are from Surf City, but for the rest of their lives they can tell people they were wed in the middle of the ocean.

"It was everything I've ever wanted, ever dreamed of," Audrey said. "It was perfect."

More than 30 miles off the North Carolina coast, there's a platform that stands 85 feet above the ocean. It's called Frying Pan Tower.

The platform was built in the early 1960s to replace a U.S. Coast Guard lightship. Most people think of it when hurricanes come through because the tower has a livestreamed camera pointed at a US flag.

After the hurricane passes, the battered flag can be auctioned off--with the money raised being donated to help victims of the storm.

Ben was a volunteer at Frying Pan Tower back in 2020. He was there helping in restoration efforts. He said one day during his time at the tower, he sat on the helipad and prayed for his soulmate.

Four days later, he got a notification that it was Audrey's birthday. Audrey and Ben had been friends for about 10 years, but they'd lost touch recently.

After getting the notification, he reached out to her and a year later the two are husband and wife.

The couple said they weren't rushing to be the first people married somewhere, but they thought it was pretty cool that they had a unique wedding story.

"This is exactly what we wanted, this is the perfect way to start things off and for us to start our future together," Ben said. "This isn't the last time we'll be back on the tower for sure."
Report a correction or typo
Related topics:
family & parentingncweddingnorth carolina news
Copyright © 2022 WTVD-TV. All Rights Reserved.
TOP STORIES
AAPI heritage celebration highlights cultures and traditions
Barbershop Buzz helps concerned men share fatherhood advice and tips
Firefighters called to two-alarm fire in Cary
1 person injured in shooting in Fayetteville, police investigating
1 person is left seriously injured after 8 car crash in Durham
Runner dies after collapsing at finish line of Brooklyn Half Marathon
Volunteers at Raleigh church package meals for people in need
Show More
Russia's claim of Mariupol's capture fuels concern for POWs
Man charged in Hope Mills double murder
Some peanut butter recalled for potential salmonella
Smith, Raanta, Hurricanes top Rangers for 2-0 series lead
First formula flights from Europe to arrive this weekend
More TOP STORIES News