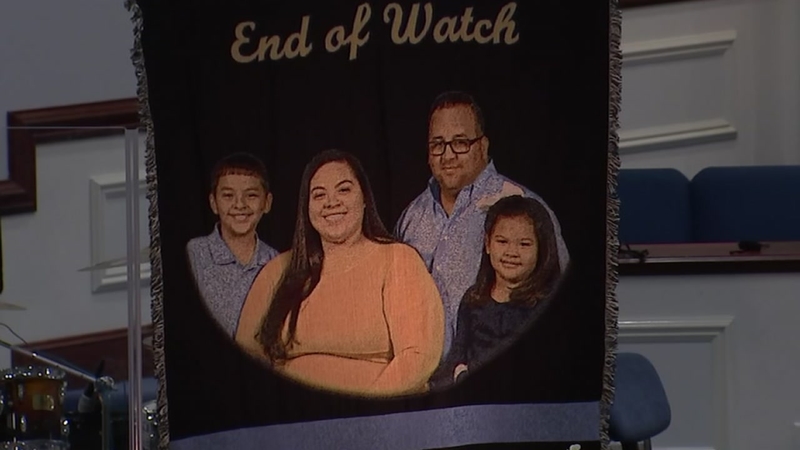 Funeral service held for Lumberton police officer killed on I-95

LUMBERTON, N.C. (WTVD) -- Funeral services were held Thursday afternoon for the Lumberton police officer who was killed on I-95 last week..

Just after 6 a.m. on Dec. 15, Officer Jason Quick was dispatched to a traffic accident on I-95 Northbound near Exit 22.

Right before 7 a.m., Officer Quick was struck by a car, authorities said.

Kadejera Inman, 24, of Fairmont has been identified as the driver who struck the officer.

Program for funeral services of Lumberton Police Officer Jason Barton Quick, 31, who died in the line of duty. Services are being held at The Rock Church of God in Lumberton. #ABC11 pic.twitter.com/yji3ZQY8O0

Officer Quick was transported to Southeastern Regional Medical Center where he died from his injuries.

"Jason was very selfless," Barnes said. "There was a time where Jason had put in to take time off. It was time that was approved, and because his squad was short ... someone had called in sick, instead of him taking the time off that had been approved, he chose to come in. He said that he could not relax, he couldn't be happy knowing he was off and his squad was short. His people were having to work harder."

Gertrude Carter cared for Quick when he was a child.

"He was thrilled," she said. "He really wanted to be in it, and all the reports I get, he did a good, good job."

Sandra Locklear, a family friend, said it's a tragic loss for the community.

"He was well-known to the church circle, as well as to the social circle, so it's a big loss and it's going to be felt for some time," Locklear said. "He has a family and young children, a mom and a dad and grandmothers and just families that are so distraught because of everything that's going on. They didn't expect this. And it's here at Christmas, too.

"He's going to be greatly missed," she added.