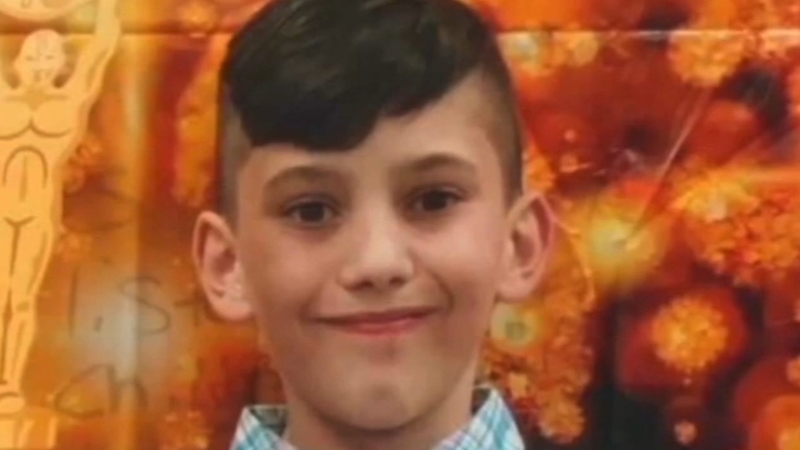 Leticia Stauch is charged with first-degree murder of a child under 12 years old by a person in a position of trust, child abuse resulting in death, tampering with a body and tampering with evidence.

Investigators said Gannon Stauch has not been found, but they do not believe he is still alive.

"Obviously, we know what the worst news is," Hiott said through tears. "The best news is that justice will be served. And I'll make sure that justice is served. Because my boy did not deserve any of this."

Leticia Stauch reported her stepson missing on January 27, telling authorities he was last seen at home between 3:15 p.m. and 4:15 p.m. before leaving to walk to a friend's house, according to the El Paso County Sheriff's Department.

In an interview last month with KKTV, Stauch denied having anything to do with her stepson's disappearance.

"I would never, ever, ever hurt this child," she told the station.

Efforts to reach Leticia Stauch or her attorney were unsuccessful.

Gannon was initially reported as a runaway, but on Jan. 30 his disappearance was changed to a missing/endangered persons case.

A neighbor said footage captured by his security camera the day Gannon went missing showed Leticia Stauch driving away with the boy in the morning, and returning hours later alone. Authorities have said they are aware of the footage and have not disputed the neighbor's description, but have described it only as "one piece in a very, very, very large puzzle."

There are search efforts for Gannon underway at Highway 105 and Highway 83 today. If you have any information regarding Gannon, please call 719-520-6666. #FindGannon pic.twitter.com/osrAgqprkw

Multiple agencies have assisted in the investigation and searches, including the National Center for Missing and Exploited Children, the Colorado Springs Police Department, the FBI Child Abduction Rapid Deployment Team, and Colorado Parks and Wildlife.