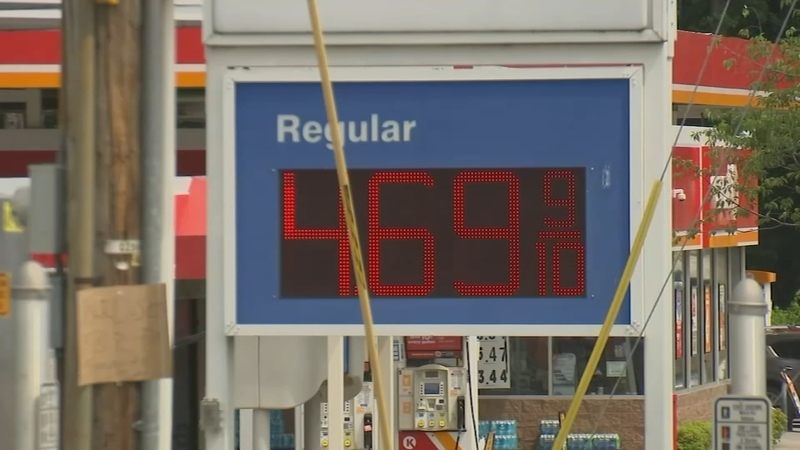 Triangle gas prices creep closer to $5, and diesel is at record high

RALEIGH, N.C. (WTVD) -- Raleigh's rising pain at the pump was written all over Ivanna Sushanty's face as she filled up her tank on South Saunders Street.

She said even if she wanted to drive less to save gas -- she can't. On a good night, she'll earn $150. But then comes her gas bill.

"Can you imagine how much I have to pay, every day? It's about 50 bucks. Every day," she said with a long sigh.

“It’s really really bad!”
Record high gas prices are taking a serious cut into Ivanna Sushanty’s take home pay with a food delivery app company ⛽️
We’ll look at the new record in the Triangle, the impact on other goods and potential signs of relief. AT 11 #abc11 pic.twitter.com/txwPl1KshH

Adding to the agony, the price of diesel fuel stands at record highs as well. It's the same diesel powering the big rigs delivering food and other consumer goods. Retailers are passing the added costs down to consumers, said Patrick De Haan, petroleum analyst at Gasbuddy.com.

"The next time (a consumer) goes to the grocery store, the hardware store; the next time they order something online, they're going to be hit with the higher price of diesel," De Haan said.

De Haan said reduced refinery capacity has put the nation's gasoline supply at its lowest level since 2014. Add in Russia's invasion of Ukraine and it's a recipe for sky-high Triangle gas prices.

"Five dollars a gallon is something that could happen (in the Triangle)," De Haan said. "and Raleigh is only less than 40 cents a gallon from that mark. But I don't think we'll get there unless there's a refinery issue or a major hurricane. But again things can change very quickly."

One thing that is not changing quickly is people's driving habits. Drivers like A.G. Zalal, filling up his F-350 pickup Tuesday night, said he's being more efficient with his car but he's still driving plenty.

"Well, I have no choice," said Zalal. "If I'm driving somewhere, I've got to go. So there is no choice for me."