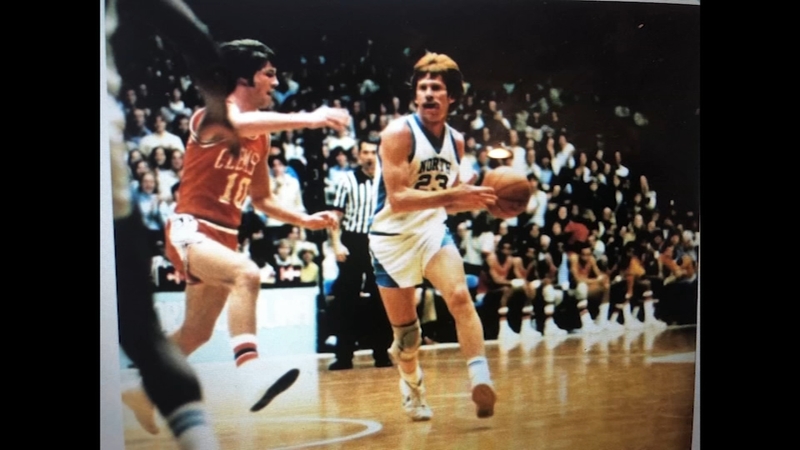 Meet the last UNC player to wear 23 before Michael Jordan

CHARLOTTE, N.C. (WTVD) -- The man who wore the number 23 for UNC basketball before Michael Jordan got it and made it legendary didn't even actually want that number.

Ged Doughton wanted his old high school 22, but Dean Smith told him upon arrival that Dudley Bradley already had dibs. As Ged told ABC11 Monday, it pays to be lucky.

"I didn't do anything, other than wear a jersey before Michael and people go 'Oh man that's cool,'" said Doughton. "I'm like 'really? Okay.'"

A 1975 state champion point guard at RJ Reynolds in Winston Salem, Ged then headed off to Chapel Hill to play for Dean Smith and alongside Phil Ford.

"He would ruin me every day in practice. Seven of the guys I think I played with wound up as first-round draft picks," said Doughton. "We went through practices with Coach Smith which were tough, so we all kind of have an interesting bond."

Doughton wound up averaging two points a game for his Carolina career, but his choice of number has made for a lifetime of laughs.

"You're sitting in a bar or restaurant talking to folks and my friends will say 'Hey - you know this guy's jersey's retired?' and then I just have to roll my eyes and tell them what's the rest of the story."

Ged and Michael have actually crossed paths twice since MJ became the most famous basketball player to ever lace up shoes. One of those meetings, which was arranged by mutual friend Fred Whitfield, took place at Michael's Hornets office.

The way Doughton tells it, it was a perfect illustration of Jordan's legendary determination.

"I said, 'Michael, you're not going to know me.' I said 'I'll give you one clue.' I said 'I was the last guy to wear your jersey before you.' And he looked right at me and it was kind of this like, okay, and then he goes, 'Don't say another word. I know who you are. I don't want any other clues, I'll figure this out.'"

After forty minutes of conversation, there was a pause.

"Michael looks at me in a very soft voice says, 'I want to say your name is Ged Doughton.' I looked at him and said 'That's right.' And he clapped his hands and he kind of jumped out of his chair, and he said 'I told you that I'd get that. I told you guys!'"

Like so many UNC alums watching ESPN's "The Last Dance" documentary debut last night, Ged was immediately swept back to his days in school and that historic number that ties him to a legend.