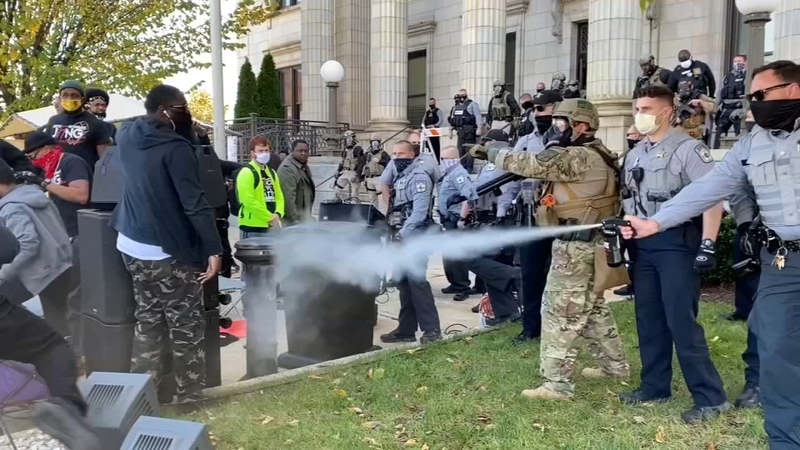 GRAHAM, N.C. (WTVD) -- The Alamance County Sheriff's Office announced on Thursday that it has filed additional charges against a reverend, as well as two others, involved in a march to the polls that resulted in law enforcement pepper-spraying demonstrators on Halloween.

Marchers and law enforcement officers had different stories about what happened during the downtown Graham "I Am Change - March to the Polls" event last month that led to authorities pepper-spraying demonstrators.

Police explain why actions were taken to end Graham protest march. The organizer vows to come back bigger and better with an event on Election Day.

Drumwright claimed that when police used pepper spray to disperse the crowd, they intimidated potential people at the march who planned to early vote afterward - the final day of early voting.

But Graham police said organizers were made aware ahead of time that marchers were not allowed to crowd the streets and disrupt traffic and parking in downtown.

The sheriff's office alleged that an altercation at the march began while deputies were investigating a report of a person who entered the crowd on the Historic Courthouse grounds with a gasoline can. Authorities said a deputy attempted to intervene by shutting off the generator, but crowd members resisted.

Rev. Gregory Drumwright, Brenden Jamar Kee and Samuel Pierre were all charged on Oct. 31 with misdemeanor fail to disperse on command. The sheriff's office added more charges this week "as a result of their involvement in an altercation resulting in the injury of a deputy."

The charges, issued on Wednesday, come after authorities said they reviewed additional footage of the altercation.

Many North Carolina politicians, including North Carolina Gov. Roy Cooper, called the actions of the local authorities a form of voter suppression and intimidation.

"This incident is unacceptable. Peaceful demonstrators should be able to have their voices heard and voter intimidation in any form cannot be tolerated," he said.

A second march to the polls took place in Graham on Tuesday, days after law enforcement used pepper spray to break up the first march.