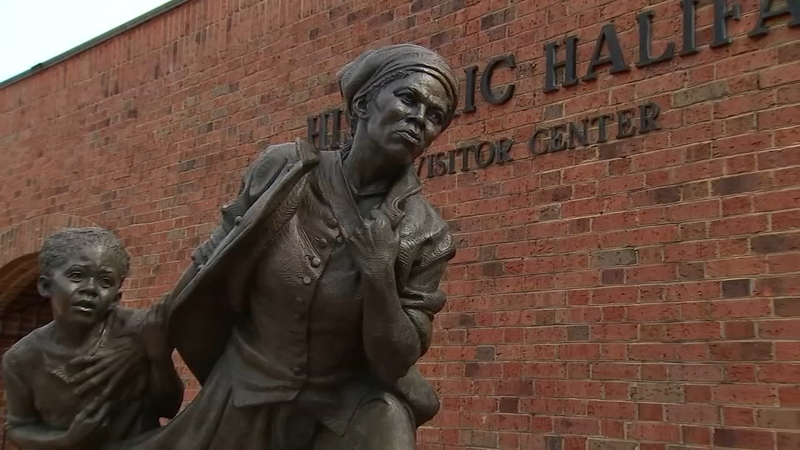 HALIFAX COUNTY, N.C. (WTVD) -- Harriet Tubman, the woman known for leading the Underground Railroad by guiding enslaved Africans to freedom, has been sculpted into a Bronze 9 foot frame and is on display in North Carolina.

"It lets me know that as a woman we can do anything. We should not be limited. We should be represented in all places," said Sandra W. Bryant who serves on the Halifax County Underground Railroad Board.

Bryant and Steven Green tell ABC11 their Board, along with community sponsors helped bring the statue to Halifax, which is about 83 miles northeast of Raleigh.

"You can really just visualize her actually going through the swamps and leading people," said Green. "It's just a moving experience. We want other people to come and experience that."
Since early 2020, the sculpture has traveled to different parts of the country.

This is its first trip to North Carolina.

The state is home to more than 20 freedom road sites, three of them in Halifax.

For the next six weeks, the 2,200 pound statue will be available to the public at the Halifax Visitors Center. Guests can then take a quarter-mile journey through the nearby underground railroad.
In 2017, Wesley Wofford from Asheville, North Carolina created this piece for a client. He said it took 18 months to complete.

The image shows a terrified little girl-trusting Tubman with her quest for freedom.

"I wanted the child behind Harriet and Harriet be very protective of her, shielding her from what was coming but also guiding her," said Wofford.

Wofford tells ABC11 the sculpture for him has taken on new meaning after the killing of George Floyd and the Black Lives Matter movement.

"It's really made me hungry for activism and speaking about important things and trying to create a more equitable future in our public squares," said Wofford.

The sculpture is available now through April 18. It will be unveiled during a special ceremony on Friday, Mar. 5, at 2 p.m.