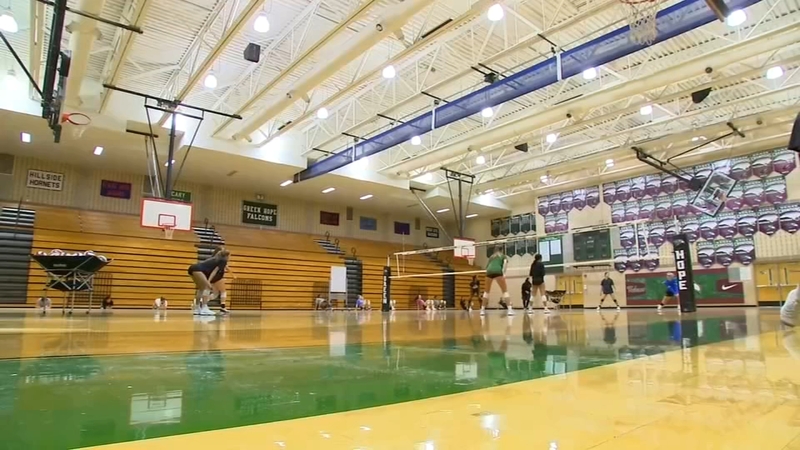 RALEIGH, N.C. (WTVD) -- For the first time during this public school year, there will be sanctioned competition as both volleyball and cross country get underway this week. As of now, players in all indoor activities have a new addition to their uniforms: a mask.

There are high school volleyball teams in the state that are under quarantine as the season gets underway. The number of teams and what schools are affected isn't being disclosed. To help stop the spread of COVID-19, the North Carolina High School Athletic Association is implementing a mask-mandate for any indoor activity -- including games.

"The mask mandate for all skill-development activities as well as for volleyball is the most effective way we have to mitigate risk," NCHSAA Commissioner Que Tucker said.

The concern is that if students aren't wearing masks now, other seasons that have yet to start, such as basketball, could be in jeopardy. Basketball players are currently allowed to participate in skill development drills only, although not everyone is following the rules.

"Which means that we shouldn't have scrimmaging and 2-on-2's, 3-on-3's, those should not be occurring," Tucker said. "Wearing the mask for skill development is required when working on free throws, when doing regular shooting drills."

Tucker is asking all players and coaches in every sport to just "dial it back." The hope is to start basketball team practice December 7 but that could easily change.

Her message to the players is simple:

"If I want to play for my high school team, then I need to understand that the things that I used to do, I probably can't do them right now," Tucker said. "Because I want to give my team a chance. I think it begins with an attitude adjustment about this virus. "

School-sanctioned athletics and club sports, which police themselves, are butting heads. Tucker knows club players aren't wearing masks and wishes she had a magic wand to make changes.

"I'd wave that wand and have those club organizations to cease operations for a few weeks. But I don't have that kind of power," she said.

As games get underway, schools are allowed to play two games a week. There is an extra week built into the schedule to navigate postponement and make up games, which are a big part of completing any season