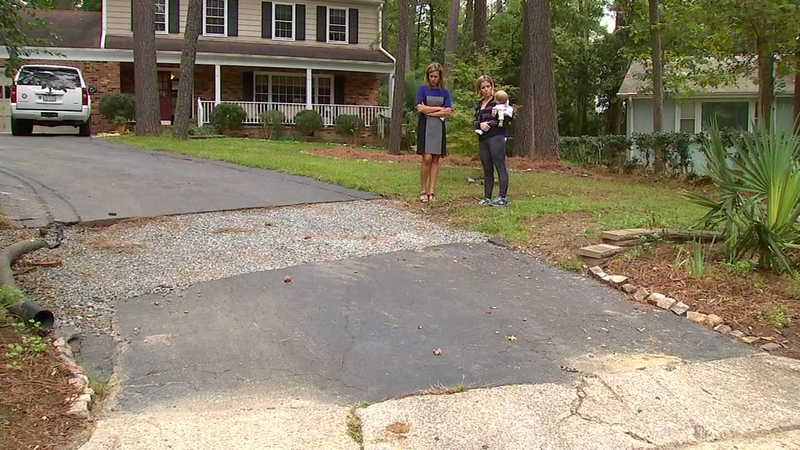 Complaints pour in about cable installers

DURHAM (WTVD) -- The new technology of high-speed internet is here in the Triangle. Google Fiber and AT&T have been busy laying fiber optic lines across the area. While many have enjoyed the faster internet downloads, it's not a welcome sight for everyone. Hundreds of homeowners have filed complaints about the damage crews left behind while installing the lines.

What can you do if your yard is torn up?


Jessica Shipley-Watson of Durham had sewage backing up into her home for days before it was discovered her sewer line was hit by a sub-contractor for Google Fiber.

In July, a subcontractor was laying Google Fiber optic lines in Jessica's neighborhood. While placing the lines in her yard, the crew accidentally hit her sewage line.

Jessica says her house smelled horrible as raw sewage was coming up into her home. She said, "It was traumatic. I had a doctor appointment and my children, and toilet water everywhere. I couldn't do the laundry and we couldn't take baths."

Jessica said crews with the City of Durham and Google Fiber, along with the subcontractor who laid the lines, all came out to see what happened.

"They bored right through the plumbing," Jessica said. "I mean there was no doubt about it being from that happening."

The sewage line was eventually repaired and Jessica's family was able to return to taking baths and doing the laundry. But she was left with the $500 plumbing bill and her driveway torn up - which will cost more than $1,200 to fix.

"No one is willing to take responsibility for all of it, and I don't want to be out," she said.

After months of going back and forth with the city and Google Fiber, Jessica reached out to me. She wanted someone to pay her plumbing bill and for her driveway to be repaired. She says she was told, "Sorry not our problem, you're on your own."

She got me involved and I reached out to the City of Durham and Google Fiber.

"You came here on a Thursday, by Monday morning I had a phone call. He said we'll handle it, I'm going to take care of it," she said.

Risk Management with the City of Durham reimbursed Jessica for her plumbing bill and also paid for her driveway to be repaired.

"It's too bad you had to do all of that and basically to get them to do what is right," she said.

A representative with the City of Durham said they will be working with the contractor and subcontractor, most likely their insurers, to be reimbursed for the repair bill.

Jessica is happy her driveway is finally repaired, but her complaint is not unique. I have heard from dozens of other unhappy homeowners who said their property was also damaged.

Raleigh homeowner Dave Grupy had to deal with not only losing his power twice, but an unsightly trench in his yard and a cut irrigation line. Grupy explained that to fix the problem, "They just laid some sod on top of everything, kind of looked like a patchwork quilt."

In August, a neighborhood in northwest Raleigh was overcome with the smell of gas after workers cut into a gas line. Homeowner Jennifer Soloway said, "That says that they're not paying attention to what they're doing."

John Palmiter of Raleigh was not happy to find that AT&T contractors dug multiple holes in his front yard. A Governors Club resident in Chapel Hill was also unhappy after crews with AT&T cut into a line in his irrigation system.

The City of Raleigh:

Raleigh has had AT&T and Google laying fiber optic lines for quite some time. AT&T has been working in Raleigh for almost two years, and Google started their project late last fall. However, a rep with the City of Raleigh said they did not keep a running count of complaints until March 2016.

Right-of-Way Manager Noah Otto said the city receives 10-15 complaints per week. Since March, they have received over 300 complaints.

The city has three inspectors who are going around to check permitted sites as work permits expire, he added.

The City of Durham:

According to Marvin Williams, Director of Public Works, the city permitted Google to work on 280 miles and AT&T to work on 632 miles.

So far, Durham has received 439 complaints for AT&T and 76 complaints for Google. The city's consulting firm explained, "Google tries to handle their own customer care and AT&T does not, thus the difference in numbers." The representative added the city does have an agreement with contractors about timeliness of property being restored to its original condition.

According to McLamb, the town mediates disputes to check that reasonable outcomes are reached. He said the town does not typically get involved unless a complaint is not being handled or the resolution is not reasonable.

On top of AT&T and Google fiber, Cary also tracks complaints with Time Warner Cable. Public Information Director Susan Moran said the town has not seen any extreme cases, but the town has still received many complaints from residents since construction began. The town has 648 documented fiber complaints, which averages out to about 11 incidents per week. According to Moran, the town communicates regularly with each company to ensure that complaints are being handled and has received good responses.

No one from Google Fiber would talk to us on camera but provided me with this statement:

"Google Fiber is building one of the biggest and most complex infrastructure projects in Triangle history. We want to be good neighbors, so we're doing everything we can to prevent unnecessary disruptions and resolve issues quickly. We take all construction-related incidents very seriously, and we apologize for any inconvenience this has caused."

A representative added they have a team dedicated to speaking with customers who have any questions or concerns about construction. Residents can call the team 24/7 at (877)-454-6959.

No one from AT&T would talk to us either on camera, but Josh Gelinas with AT&T provided me with this statement:

"With the launch of our 100% fiber network to over 150,000 locations in the Raleigh-Durham area, AT&T has positioned Raleigh-Durham as a gigabit city by bringing customers our fastest internet speeds. AT&T has dozens of supervisors and inspectors in the field to ensure our contractors are performing to our standard. We work closely with city officials to ensure our work is done in a timely and orderly fashion. Our contractors are trained to obtain proper permitting, closely follow local construction codes, and abide by rules governing rights-of-way and property easements.

We place door hangers at each residence and place signage within subdivisions to identify what's taking place and how to reach us in the event of an issue. We track damages and other issues and review performance with our contractors performing the work. As we identify poor performers, we cull those out. AT&T's goal is to minimize impact on residents before, during and after construction and to keep them informed through a variety of means throughout the network expansion process.

Whether large or small, these damages impact the public and that is not lost on AT&T. Damage can occur for a number of reasons, from contractor error to locations not being accurate. Before we begin a project, we talk with locating firms to provide them with some high-level visibility into where we anticipate completing work on a regular basis. Furthermore, as a part of the large project locate process, we typically provide 30-60 days' notice versus the minimum 10 days.

We are constantly collecting data and reviewing our processes to evaluate our efforts. We make changes as needed to ensure improvements in the process, for AT&T and our utility partners. We work with excavators, other utility owners, locaters, and state and local municipalities to identify best practices and to better train our own forces, that of our contractors, and their sub-contractors."

Here are your rights when it comes to utility easements. You should first receive an informational door hanger in advance of the work. Then, different color markings will be sprayed on the ground several weeks before construction. The markings show the contractors where the existing underground utility lines are laid. If you have an irrigation system or dog fence, you should mark it so crews don't damage it.

Companies can place the cables along the water, sewer and electrical lines, in most cases, the right of way includes the area from the curb towards your home for about 11 feet. If the crew has to venture further than the easement allows, companies should get permission from property owners before working on private property.

Counties are not involved in the project, so you should check with your town or city for what to do. Most municipalities have information about it on their website.