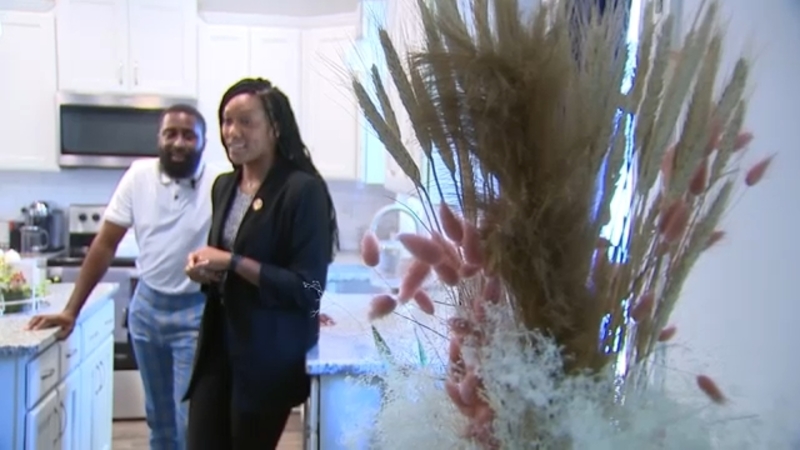 DURHAM, N.C. (WTVD) -- More than 800 people nationwide have benefited from a Durham-based company called Home Lending Pal, including one first-time home-buying couple out of the Triangle.

Last May, the Sanders moved into a three-bedroom, three-bath dream home nestled in Knightdale.

"It's absolutely amazing," said Vonsia Sanders. "It's a goal that we've always had set for ourselves. So, to achieve it so young, it's a huge accomplishment."

They used Home Lending Pal to help them determine what they could afford.

This is how it works, individuals create an account on their website, providing their personal information, which includes a soft credit check. The site then gives buyers a price range within their budget and identifies potential lenders.

"Everyone could benefit from it," said Jamison Sanders.

CEO Bryan Young and his co-founder Steve Better officially launched the Black and Latino-owned venture in Durham during the pandemic last summer.

Young was inspired to start the company after his family nearly lost their home in Fayetteville during the subprime mortgage lending crisis in 2008.

An Oakland homeowner's house was appraised for $150,000 more after he had a white-passing friend stand in for him after a low appraisal.

"To have an adjustable-rate mortgage that kind of just caught us off guard with interest-if this could happen to us, I'm sure it could happen to a lot of other people," said Young.

According to Pew Research, Black homeownership still hasn't recovered since its peak in 2003 at 49.4 percent.

These are homeownership numbers among racial lines during the nationwide pandemic compared to 2019:

According to Pew Research, Black homeownership has remained flat since 2019.


"It's one of the greatest means to drive wealth and yet our people are not taking advantage of it," said Young.
And in some cases, disproportionately denied. Black Americans are denied at greater rates for home loans than any other race or ethnicity, according to the Consumer Finance Protection Bureau.

Young said his company built a specific software allowing lenders to access the borrower's financial information without revealing the race, gender or age of the individual.

The company says this eliminates discrimination before a decision on the loan is made -- giving couples like the Sanders an equal chance to own a piece of the American dream.