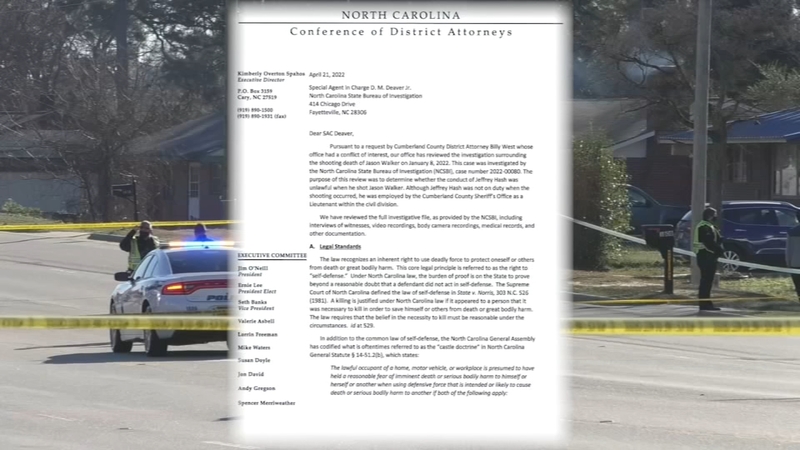 FAYETTEVILLE, N.C. (WTVD) -- The North Carolina District Attorney's Office will not be seeking charges against a Cumberland County Sheriff's deputy who shot and killed a Fayetteville native who ran into the road and jumped on the deputy's truck.

Deputy Jeffery Hash, who was off-duty and had his family in his personal vehicle, got out and eventually shot Jason Walker on Jan. 8.

The state says it cannot prove the shooting was unlawful beyond a reasonable doubt and said it was justified self-defense.

Activist Myah Warren is enraged by the ruling.

"I believe that this message that is being sent out is (that) it's OK for police to pull the trigger because there's going to be no consequences held for them. It sends a message that we as citizens, that we need to be on alert at all times. There are people who are afraid of the police even now, even before this happened. So can you imagine how it's going to be after this? This is ridiculous," said Warren.

Hash said he was driving down Bingham Drive near Shenandoah Drive.and nearly hit Walker, who ran out into the roadway.

Walker allegedly jumped on the hood of Hash's vehicle. He then ripped off a windshield wiper and started hitting it against the windshield, damaging the glass.

Walker eventually got down and allegedly lunged at Hash.

The North Carolina State Bureau of Investigation found that Hash, along with his wife and child, was in "imminent danger."

A report noted that it is possible other alternatives were available, but that Hash made a split-second decision.

The SBI says this wound by itself would have been fatal.