Joshua James' plea deal is contingent on his cooperation with the U.S. government.
ABCNews
By Quinn Owen, Alexander Mallin, and Luke Barr 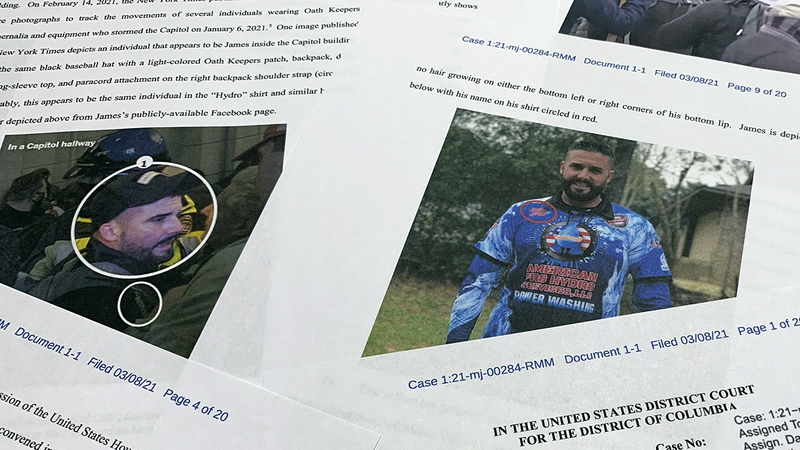 Capitol rioter is 1st to plead guilty to seditious conspiracy

WASHINGTON -- Joshua James, 34, of Arab, Alabama, pleaded guilty to seditious conspiracy charges on Wednesday as part of deal with prosecutors contingent on his cooperation with the U.S. government in their ongoing prosecution of defendants who were involved in the Jan. 6 attack on the U.S. Capitol.

The plea deal is the first of its kind for a Jan. 6 defendant and comes nearly a year after James was charged with impeding and obstructing Congress' affirmation of the Electoral College vote in the 2020 presidential election.

James pleaded guilty before the court to one count of seditious conspiracy and one count of obstructing an official proceeding in exchange for a reduced offense level, which the judge will consider at sentencing.

The plea agreement directly implicates Oath Keeper founder and militia leader Stewart Rhodes, among others, in a conspiratorial plot to stop the transfer of power ahead of President Joe Biden's inauguration, with Rhodes predicting "a bloody and desperate fight."

"They used encrypted and private communications, equipped themselves with a variety of weapons, donned combat and tactical gear, and were prepared to answer Rhodes's call to take up arms," reads the agreement between James and prosecutors.

Ample evidence has emerged over the last year of what happened at the U.S. Capitol on Jan. 6, 2021.

James acknowledged he and others collected firearms at hotels on the outskirts of Washington, D.C., and were ready to use them to prevent Biden from becoming president.

James admitted that he was instructed along with other Oath Keepers to "be prepared, if called upon, to report to the White House grounds to secure the perimeter and use lethal force if necessary against anyone who tried to remove President Trump from the White House, including the National Guard or other government actors" who might be sent to remove him.

One individual, unnamed in the agreement, messaged James on New Year's Eve 2020 saying they had "friends not far from DC with a lot of weapons and ammo."

"That might be helpful, but we have a shitload of [quick reaction forces] on standby with an arsenal," James responded.

James met with Rhodes in the Washington, D.C., area in November 2020. The two attended multiple online meetings to organize and make plans for Jan. 6 in the weeks leading up to the Capitol attack.

In December, Rhodes sent a message to an encrypted group chat that included James and said, "'It will be a bloody and desperate fight. We are going to have a fight. That can't be avoided,'" according to the plea agreement. One of the invitation-only Signal group chats was titled "Jan 5/6 Op Intel team" and another was titled, "DC OP: Jan 6 21."

The "intel" group chat was used by James and Rhodes to coordinate just before rioters breached the Capitol with one member asking if those who pushed inside were "actually Patriots." Rhodes responded, apparently to confirm they were on the same side: "Actual Patriots. Pissed off patriots."

Wearing a backpack, combat shirt, tactical gloves and Oath Keeper gear, James acknowledged that he and others unlawfully entered the Capitol just after 3 p.m. after which he assaulted a D.C. police officer. He discussed with another rioter whether to move forward before deciding to push into the Capitol Rotunda.

A year after thousands of pro-Trump rioters stormed the U.S. Capitol, hundreds of people who assaulted officers and committed other crimes still haven't been caught.

After Jan. 6, James and Rhodes took steps to conceal their identities and share additional firearms. At one point, James said Rhodes ordered him to help defend against his possible arrest.

James told prosecutors that after a group of Oath Keepers met at an Olive Garden following the riot, he took them to a gas station where he distributed the thousands of dollars of firearms he had been accumulating leading up to Jan. 6 to different members, including James himself.

Rhodes, suddenly on alert that he and the others might be arrested for their role in the attack, also allegedly left his phone with a person from the group and departed with another member so law enforcement would have trouble tracking him.

Rhodes also allegedly gave James a burner phone and told him that he should create a fake identity and home address, and instructed him to turn off the phone anytime they spoke about "the Presidential Election and next steps."

James admitted that he joined Rhodes as he went around buying firearms, ammo and other tactical equipment after the two met up in Alabama and drove to Texas, with Rhodes telling James he wanted him to serve as his personal security detail. In his shed in Alabama, James said he stored multiple firearms, scopes, magazines night-vision equipment, thousands of rounds of ammunition and multiple burner phones while awaiting instructions from Rhodes.

James' statement of offense also implicates Kelly Sorelle, the self-described attorney for the Oath Keepers at the time of the insurrection. While she has denied ever asking members to delete their messages, James revealed to prosecutors a new message from "an individual he understood to be an attorney for the Oath Keepers that stated, 'STEWART: YOU ALL NEED TO DELETE ANY OF YOUR COMMENTS REGARDING WHO DID WHAT. You are under zero obligation to leave them up."

James agreed to pay $2,000 under the agreement for the damages to the Capitol. The agreement requires James to cooperate with federal authorities, testify before a grand jury, sit for interviews and turn over an accounting of his financial assets.

The maximum penalty for seditious conspiracy is 20 years in prison, a fine of $250,000 and three-year supervised release, along with other fees and penalties. James' cooperation can be used in determining his sentencing, presiding Judge Amit P. Mehta explained to the court.

A year after the Jan. 6 insurrection, some of the lawmakers who were trapped in the upper House balcony that day are still recovering from lingering trauma.

Without James' full cooperation, as determined by the government, he will stand in violation of the agreement.

The 10 other alleged Oath Keepers charged in the seditious conspiracy plot, including Rhodes, have pleaded not guilty to all charges against them.

Lawyers for James did not immediately respond to ABC News' request for comment.

According to the indictment, James was a leader of a second "stack" of Oath Keepers who breached the Capitol building through the east side.