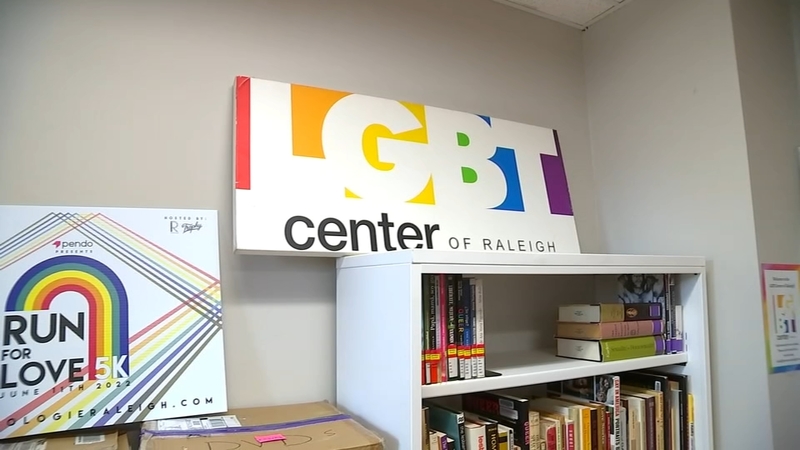 LGBTQ+ library in Raleigh remains a beacon of hope

RALEIGH, N.C. (WTVD) -- Reading books about the LGBTQ+ experience is affirming and, in many ways, life changing for Brandi Roberts .

"I was able to gravitate toward the stories that represented me. I felt more seen that way. It was really impactful for my life," Roberts said.

The comedienne from Raleigh uses laughter to talk about her life experience.

But her personal journey to coming out as Lesbian was really no joke.

She realized around the age of 7 that she was different, but there were no books to help her understand why.

Twenty years later, Brandi finds herself and her community reflected in books at the LGBT Center of Raleigh Library.

Her most recent read: The autobiography of poet, author and activist Audre Lorde.
"I identify with her because she is a lesbian and a woman of color," said Roberts. "She grew up in a real pivotal time in the 60s, 70s, 80s when things were changing but it was still very hard--not only as a woman but a woman of color--and she used her voice to advocate for those who were not able to voice what they wanted."

Today, new voices are emerging to keep LGBTQ+ books out of public libraries and public schools, despite 21 percent of young people born after 1997 now identifying with the community according to Gallup.

This month, the state Senate passed the Parents' Rights Bill, part of the proposed law bans LGBTQ+ course curriculum for students in kindergarten through 3rd grade.

"It's disheartening," said Kori Hennessey, director of Programs at the LGBT Center of Raleigh. "We want children to understand inclusion."

Hennessey is glad Governor Roy Cooper plans to veto the bill, but they say it emphasizes why the LGBT Center of Raleigh Library matters.

Library books are color coded based on where individuals fall on the LGBTQ+ spectrum.

"Including the Transgender community, the non-binary folks, the bisexual community--we have a lot of writers of color," said Hennessey.

The library once boasted more than 5,000 books, but the pandemic and lack of funding forced the LGBT Center to scale down dramatically, into a new office in the Commerce building downtown on Hargett Street.

"Moving into a smaller space made the most sense. But having to pare down in some ways had been sad because we had such an amazing collection. It was the biggest library in the Southeast," said Hennessey.