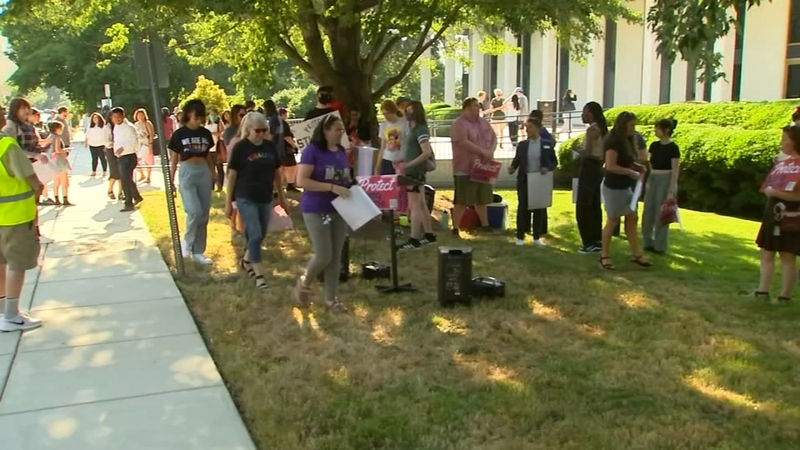 The vote on HB755 took place Wednesday afternoon and passed the 28-18 after a third reading. The bill now goes to the House.

Some of the major parts of the legislation include blocking schools from including LGBTQ issues in their curriculum for students in kindergarten through third grade.

Some folks have gathered in downtown Raleigh outside the legislature as #HB755 goes to a vote on the senate floor. Likely that @NC_Governor will veto this if it gets to his desk anyways #abc11 pic.twitter.com/2WSVZTctro

"We know that children perform better in school when their parents are involved in their education. By allowing parents to review instructional materials like textbooks, parents can take a more active role in their child's education," Senate Education Committee Chairwoman Sen. Deanna Ballard, R-Watauga, said. "Schools shouldn't be withholding information from parents about their child's well-being. This bill establishes transparency as the new norm in education."

It also requires schools to notify parents of healthcare services their kids receive or if their child changes their pronouns.

Republican lawmakers say the bill will give parents more control over what their kids are being taught. The opposition says the bill could lead to the forced outing of LGTBQ students which in turn could increase the risk of suicides and abuse.

Supporters say it would give parents more control over what's taught in the classroom, but critics are calling the bill dangerous.

Organizations opposing the bill gathered in downtown Raleigh ahead of Wednesday's vote.

A former teacher said she felt she had to be part of the protest.

"There is a concern there are some parents who are being so vocal about wanting certain curriculums out of the school that it is overriding the voices of the parents who want them in schools," said Taylor Cordes, who is also an LGBT advocate. "It's this kind of legislation that is driving a lot of teachers to leave because we see real problems, we know the real problems in our education system and instead of those getting addressed, we're seeing prioritization of legislation like this."

Rose Lintner who also attended the rally said it felt like "cruelty for cruelty's sake" after the bill was passed Wednesday.

"I'm glad to have seen everyone come out today. It means that there are people who still support us, people who still believe in justice and rights," Lintner said. "It hurts to be sitting in a space facing micro aggressions while just wanting to be seen in society."

A release from Senate Republicans said the bill includes "several measures that broaden the rights of parents" in education: