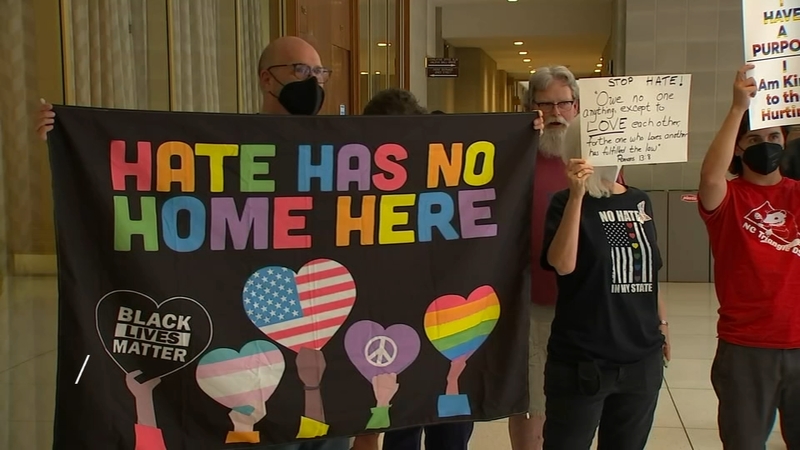 RALEIGH. N.C. -- Republican legislation that would give North Carolina parents more say over their children's public schooling and health is heading to the Senate floor after another affirmative committee vote Tuesday.

The Parents' Bill of Rights legislation includes a provision that would prevent instruction on sexual orientation and gender identity in public school curriculum for kindergarten through third grade. Schools would have to notify parents about changes to their child's health and services that they are receiving - like psychological treatment - or before they could change a child's name or pronouns in records.

LGBTQ activists likened these provisions to those in a recently approved Florida law that opponents inaccurately dubbed the "Don't Say Gay" bill. Several urged GOP lawmakers Tuesday to stop the measure, saying more young people would have their sexuality revealed against their will if it became law. Other youth will keep their sexuality hidden, increasing further the threat of suicide, bill opponents argued.

"This bill proposes forced outing of queer kids," the Rev. Vance Haywood, senior pastor of St. John's Metropolitan Community Church in Raleigh, told reporters. "It's creating an environment where we're telling folks that it's not OK to be yourself. You have to hide parts of who you are."

The measure, which passed the Senate Rules Committee on a divided voice vote, was expected to receive floor debate and a vote Wednesday. If approved, the bill would go to the House, which like the Senate is controlled by Republicans.

Democratic Gov. Roy Cooper already signaled his opposition, calling the bill a "Republican political ploy" and warning legislators to "keep the 'Don't Say Gay' culture wars out of North Carolina classrooms." GOP lawmakers would need help from several Democrats to override any Cooper veto. An override has not been successful since December 2018. The bill could turn into a Republican election-year cudgel used against Democrats in General Assembly elections.

The measure would enumerate and broaden the rights parents already have in state and federal laws. Parents would be offered complaint and appeals procedures if they believe districts or administrators are not complying with the rules.

"We are seeing too many instances these days where the interests of parents and families are being overlooked or being ignored and are being even condemned," said John Rustin with the North Carolina Family Policy Council, who spoke for the measure.

Senators shepherding the bill say the prohibition of instruction on LGBTQ issues is different than the Florida law, but some speakers Tuesday disagreed.

Sen. Ralph Hise, a Mitchell County Republican, said Tuesday that ensuring parents are notified before or when medical services are changed is reasonable. Hise described a situation where he and his son's physician had to sign forms so he could take an over-the-counter antacid at school.

"Compare that in the context where ... a child would be diagnosed and receive mental health treatment or physical health treatment without ever notifying a parent," Hise said. "And we've got to go get a doctor and a parent signature for an antacid?"