'I can do anything everyone else does': Henderson girl hits a shot of a lifetime by scoring first basket 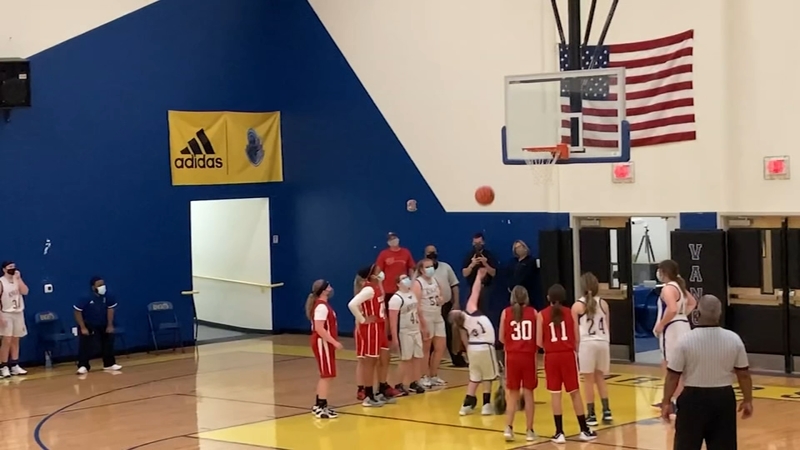 HENDERSON, N.C. (WTVD) -- A middle-school basketball player in Henderson is making a case for the best Cinderella story before March Madness even begins by fighting her way onto the court and showing the world her ability.

"It was fun," said seventh-grader Makenzie Pendergrass. "I was happy I made that shot. I just was pushing hard. I didn't want to give up because I just feel like even if I get a minute or 30 seconds it's still means something to me because I never got to play. Even 10 seconds would be fine."

When Makenzie was 2, doctors found a massive tumor on her back and decided to operate. The surgery left her with nerve damage in her right leg, though that's never stopped her from wanting to play just like everyone else.

"She wants to be treated as an equal," said her mom, Brandy Pendergrass. "Just because she has a disability, she doesn't see her disability. She just wants to be like everybody else running up and down the court."

RELATED: Wilson woman isn't letting physical differences keep her out of the game

"It's an adventure," said Brian Howard, Mackenzie's basketball coach. "If you relax off of her she'll let you know about it. She was looking forward to this year because she knew I wasn't going to allow her just to sit around in practice. She wanted to be coached, she wanted to dribble the ball, she wanted to be able to score the ball. It's been wonderful."

Before this year, Makenzie had never gotten into a game without her wheelchair because of safety issues, so she decided to write a letter telling her coach how she felt, which read. in part, "I go to all of the practices to get better but even if I am good at the sport I still can't play. It is unfair because I will never be able to put on a jersey."

"I just feel like I can do anything everyone else does," she said. "Even though some people may say I can't, I'm like OK, you want me to try it? I'm able to do anything you can."

Her coach wanted her to set her goals higher than just playing but admits it was tough keeping her off the court.

"It tugs on your heartstrings pretty tough," Howard said. "Her goal has always been to play in games, but I wanted her goal to be to score in a game. That's what we focused on going into this basketball season."
Through perseverance and determination, Mackenzie not only got a uniform and a chance to play but she scored her first bucket.

Howard said those two points don't compare to what she means to the team as a person.

"Her personality, she's always encouraging teammates during practice or games," he added. "You hear her, she's very vocal. She's also an inspirational person for them because they know if she's going to come here and work hard every single day when she doesn't have to then we have to show up every day and we have to put forth our best effort."

"I feel like she's unstoppable in anything she does," Brandy said. "I don't know how to explain how determined she is. It doesn't matter. Even therapists say she's so determined. Anything you put in front of her, she's going to surpass it."