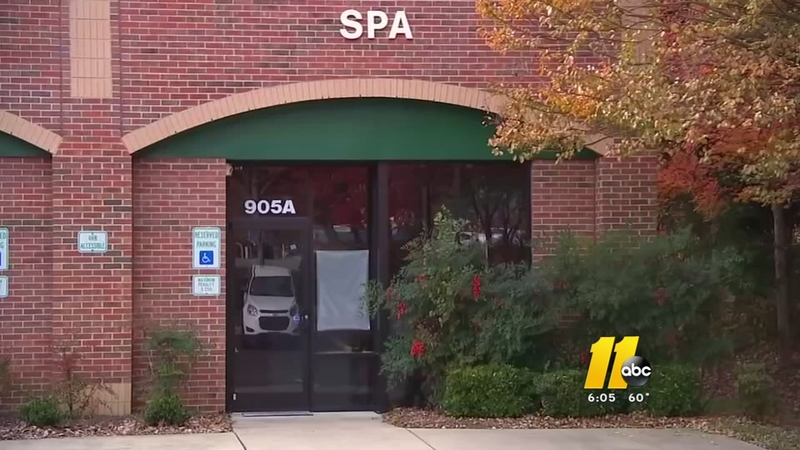 Neighbors in the area told ABC11 they saw a steady stream of men eager to get inside the business that investigators said was operating illegally.

"We watch men go in and out at all times of the day and night," said Carole Welker, an employee at Grand Street Pizza next door.

The business is closed.

One of the alleged owners, Ri-Ping Lan is in custody on charges of human trafficking and prostitution.

Investigators said she was operating two massage parlors listed by various names without a proper license.

"That's not good. It's just not something you would envision for Knightdale," said Mercedes Poole, who manages the Grand Street Pizza nearby.

Investigators released new search warrants that show the massage parlor used messages such as "eager to please" in online ads to attract its clientele.

After neighbors complained about the activity, Knightdale Police used informants to pose as customers.

The warrants said the investigators were told to remove all their clothing, including undergarments.

The rubdowns would become sexual, and then the fake masseuse would offer to engage in a sex act for as much as $60.

Welker and Poole say they saw one customer show up for his appointment as police searched the business.

"He got in his car and he left this parking lot so fast," Poole said.

Police won't say whether there will be more arrests.

Part of the investigation included a search of the suspect's home.

ABC11 has decided to slowly reduce the number of stories on the website that have a comments section. We believe very strongly that our audience should have an opportunity to discuss and debate events in our world, however, we have not been able to moderate the comments as well as we would like. Instead of hosting a platform that could allow a few loud and ugly voices to dominate a conversation, we want to encourage everyone to join us on our social media platforms and speak out there. Facebook: facebook.com/ABC11 Twitter: twitter.com/ABC11_WTVD
Report a correction or typo
Related topics:
knightdalewake countyarrestprostitutionsex traffickingwake county news
Copyright © 2022 WTVD-TV. All Rights Reserved.
RELATED
NC massage parlor owner arrested in human trafficking case
TOP STORIES
Wake County homes left damaged by severe weather Wednesday
Surging child care costs force difficult decisions
Hundreds more Fort Bragg soldiers return from deployment
Gas prices could fall under $4 soon, analyst says
Gov. Cooper signs Executive Order to strengthen abortion access
First case of monkeypox confirmed in Wake County
Man charged in shooting death of child, adult at Raleigh apartment
Show More
St. Augustine's luring west coast students with the HBCU experience
Triangle area on the lookout for spotted lanternfly
Companies hiring more teen workers to fill gap, according to data
Uvalde officer asked to shoot gunman before he entered school: Report
NC restaurants can't get insurance payouts for virus-related losses
More TOP STORIES News