Thousands gather in Memphis for 50th anniversary of MLK assassination 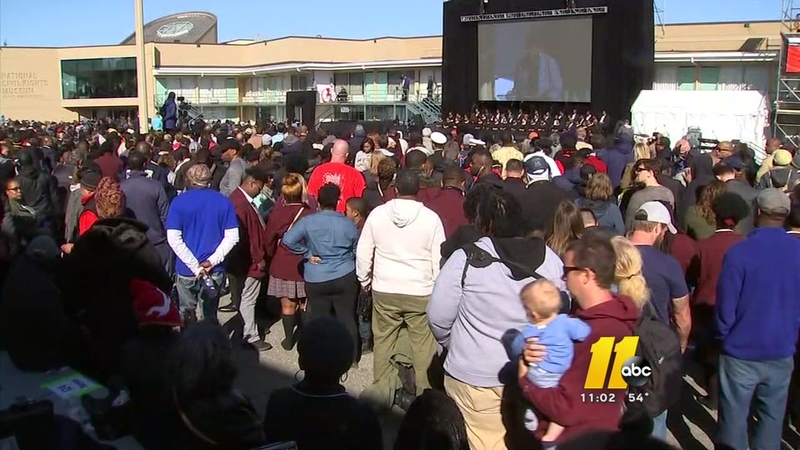 Thousands gather in Memphis for MLK50

In Memphis, a fresh wreath was laid outside room 306 at the Lorraine Hotel where the civil rights icon was gunned down April 4, 1968.

"The impact severed his tie. Hit him in the neck. I'm convinced he never felt the pain," said the Rev. Jesse Jackson.

RELATED: Martin Luther King Jr. was scheduled to be in North Carolina the day he was assassinated in Memphis

That moment still feels raw for Jackson five decades later. He was with Dr. King when he was shot. Wednesday, he called his assassination a crucifixion.

I AM MAN Rally starting soon with an all star line up of civil rights activists, recording artists and congressional leaders. The rally is honor of the 1300 sanitation workers #MLK was fighting for in Memphis. @RevDrBarber will speak. #ABC11 #MLK50 #MLK50Forward #MLK50NCRM pic.twitter.com/R4iSBIMcds

Jackson and others who spoke challenged the audience to uphold his vision.

MLK was scheduled to be in North Carolina the day he was assassinated in Memphis.

The Rev. William Barber, who has taken up the mantle and leading the new poor people's campaign is demanding equal pay and humane working conditions for laborers.

"Nothing would be more tragic than for us to turn back now," said Barber.

Earlier in the day, in the spirit of King, people called attention to human rights injustices outside the labor union office for Memphis' sanitation workers.

And then they marched in similar fashion to the 1968 I AM MAN protest King led for 1,300 striking workers.

🎶 Jammin’ at the I AM MAN rally with @common. Listen to his freestyle #MLK50 #MLK50Forward #MLK50NCRM pic.twitter.com/ZEoMPVTpeG

"Yes, he had dreams. Yes, he was a communicator. But really he was a revolutionary," McSurely said.

King was a man whose influence impacted many who travelled to Memphis from the Triangle.

Wednesday, April 4 will mark 50 years since the assassination of Dr. Martin Luther King Jr. at the Lorraine Hotel in Memphis, Tennessee.

Ward said he was 9 in 1968 when he learned King was assassinated.

"I understood at an early age that I had to dedicate my life to service," Ward said.

Durham Pastor Benji Kelley traveled to Memphis with more than 100 members of his congregation at Newhope Church.

"They might have killed the dreamer but the dream lives on," Kelley said. "We've come so far but we still have a long ways to go."

Fifty college students from the nation's Historical Black Colleges and Universities performed during the ceremony at the National Civil Rights Center as part of the 50 MLK Legacy Choir.