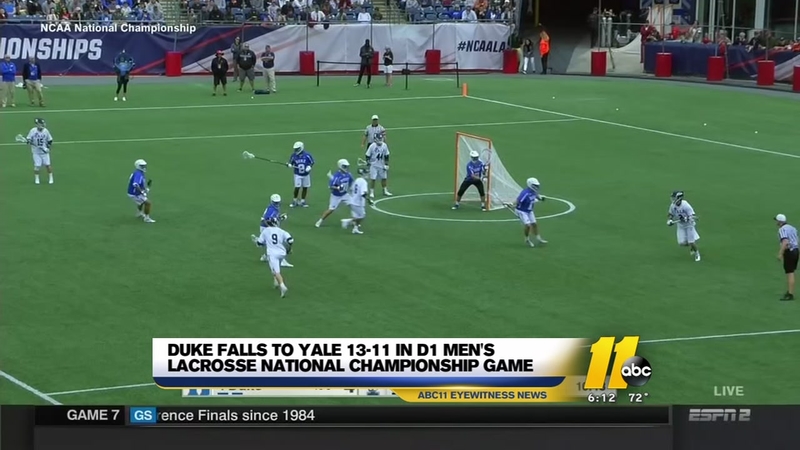 FOXBOROUGH, Mass. -- No need for Yale to continue referring to its last "national championship" in lacrosse.

The Bulldogs claimed an undisputed title with a 13-11 win over Duke in the NCAA lacrosse championship game on Monday, scoring 36 seconds in and fighting off every rally the Blue Devils could put together.

"It's just an incredible, incredible experience," said Yale captain Ben Reeves, who closed out his college career with a goal and three assists.

Jack Tigh scored 36 seconds into the game for his first of three goals in the opening half and Matt Gaudet scored four goals for Yale, which last claimed a lacrosse national title in 1883 - long before the NCAA existed.

The third-seeded Bulldogs (17-3) scored the first three goals and struck first in all four quarters while holding off the three-time national champion Blue Devils. Jack Starr made nine saves for Yale, which led 10-5 midway through the third period and never let Duke (16-4) get closer than two.

"We were one of the better teams at the start of the season and now we're the best team at the end. That, to me, is mission accomplished," said Yale coach Andy Shay, who has taken the Bulldogs to six of their nine NCAA tournament appearances.

Yale never made it passed the NCAA quarterfinals before beating top-seeded Albany 20-11 on Saturday in the semifinals, when Gaudet scored six and Reeves had five goals and four assists. Gaudet got his first on Monday with 9:13 left in the first period, after Tigh had already scored two, and added three more in the second half.

#Yale outshot #Duke 21-17 in the first half pic.twitter.com/K5IlhfoCAe

"As soon as I saw the back of my defender's helmet, I just went under him," Gaudet said. "They'd be able to draw the slide and I was able to get my lay-ups.

"I just owe it all to my teammates."

The Blue Devils honoring Army Sgt. James John Regan, a Duke lacrosse letterman from 1999-02, who was killed Friday, Feb. 9, 2007, in northern Iraq of wounds suffered when his vehicle was struck by an explosive. #MemorialDay #NCAALAX #ABC11 #Duke @DukeMLAX pic.twitter.com/pnJ0Ap8oMN

Yale is the first Ivy League school to win the title since Princeton in 2001.

Justin Guterding and Joey Manown had two goals and an assist each for Duke, which fell to 3-3 in the championship game.

"They played great and they came out hot," Guterding said. "We started on our heels. It's tough to play from behind."

Manown's goal with 5:59 left in the third period was the first of three straight goals for Duke that brought the Blue Devils from down 10-5 to 10-8 in less than three minutes.

Yale was back up 12-9 after three quarters and Gaudet scored again with 8:11 left in the fourth, giving Yale enough cushion to hold off Duke's attempts to rally.

Danny Fowler had six saves for the Blue Devils. Joe Robertson, Peter Conley and Kevin Quigley scored two goals apiece for Duke, which was in the title game for the first time since clinching back-to-back championships with an 11-9 win over Notre Dame in 2014.

Tigh scored the first two goals of the game and picked up his third before halftime, giving Yale a 6-4 lead entering the second half.

Reeves scored his first of the game with 13:33 left in the third and added an assist on Matt Tevlin's goal 1:35 later to put the Bulldogs up 8-4. Yale needed less than two minutes to go up 9-4 when Gaudet scored from the left side of the net off a pass from Reeves while Duke was a man down because of a slashing call on Reilly Walsh.

"They were winning face-offs. They had more possessions and we weren't picking up some of the ground balls that I think we would have liked," said Brad Smith who had a goal and an assist for Duke in his final game. "It's tough to play from behind against anybody. They were smart with the ball and kind of took the air out of it a little bit."

The Blue Devils won the faceoff and Guterding scored 10 seconds later, but Gaudet struck again for Yale for his 40th goal of the season, putting the Bulldogs up 10-5.

"We came out hot in the third quarter and we knew Duke was going to respond shortly after," Reeves said. "We were able to make a couple plays late in that third quarter to kind of stretch that lead and thankfully hold on to it."

Duke climbed back in it with three straight goals. Yale's Jason Alessi atoned for a penalty with a goal with 27 seconds left and Yale led 12-9 after three.

"It was an absolute battle. We jumped out on them and they grinded and we responded by grinding," said Shay, who called the title a going-away present for Yale athletic director Tom Beckett, who hired Shay 15 years ago and is retiring at the end of the academic year.

Shay asked Beckett as he entered the postgame news conference if he would agree it was an "outside-the-box hire."