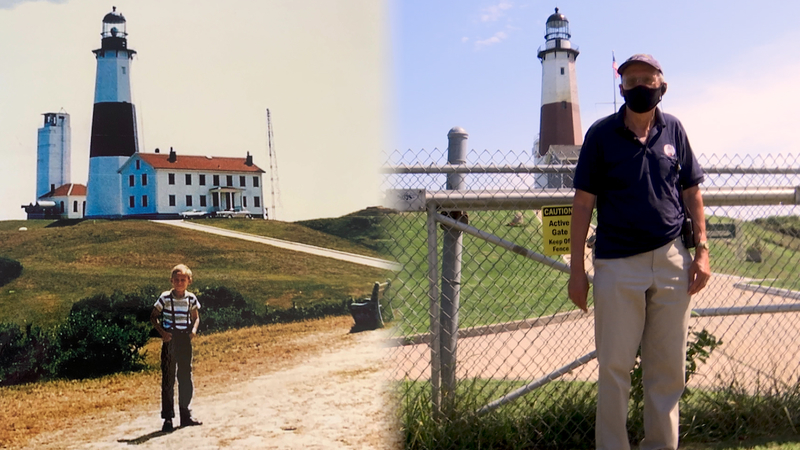 MONTAUK, New York -- The Montauk Point Lighthouse is a National Historic Landmark that brings people from across the country to visit this iconic spot on Long Island.

The breathtaking views and picturesque landscape isn't the only reason people come out to see the "end of the world", but the lighthouse's extensive history as well.

The point's current name, Montauk Point, refers to the Montauket Indians, who were part of a confederation of four local tribes that also included the Cutchoges, the Shinnecocks, and the Manhasset's.

The chiefs of the four tribes were all brothers who had inherited authority from their father, and between them, they controlled most of Long Island when the first European settlers arrived in the seventeenth century.

Montauk Point was considered such an important and dangerous piece of land that in 1792 President George Washington personally authorized construction of a lighthouse there.

When Long Island's Henry Osmers visited the historic landmark in 1957 on a family trip, he was only 7-years-old at the time, but was mesmerized by the beauty of the lighthouse.

As he grew up, he started to venture out on his own when he got his driver's license paying his respects to a place he loved so much. He continued to do so bringing his wife on dates and eventually his children.

"I didn't really see myself working at the lighthouse until many years later," said Osmers. "In 2001 when I applied for a job as a tour guide here and it wound up turning into so much more."

Osmer's passion turned into a second career path when he was offered a full-time job as a tour guide while at the same time writing several books on the lighthouse and Montauk's history.

Osmers' dedicated work towards the lighthouse and passion can be seen as he walks the halls of the lighthouse's, museum providing visitors with facts and stories behind every artifact.

Related: 'Magic bus' provides therapy to children with special needs who are stuck at home

"I always refer to the public as our bread and butter, because without them we don't exist," said Osmers. "Even if you are having a bad day you gotta leave that at the doorstep, you can't being that in here.

The people that are coming in, they could be coming from anywhere. They are coming in here fresh and they are looking to have a good time, you gotta be ready to give them one."

At 70-years-old Osmers does not plan to retire anytime soon, however, he has thought about it since his commute from Shirley especially with the traffic is probably his least favorite part about his job.

Osmers encourages all New Yorkers who have not visited the iconic landmark to make a day out of it and take the drive out to see a piece of Long Island history.