Police use iPhone to rescue woman after car plunges down ravine 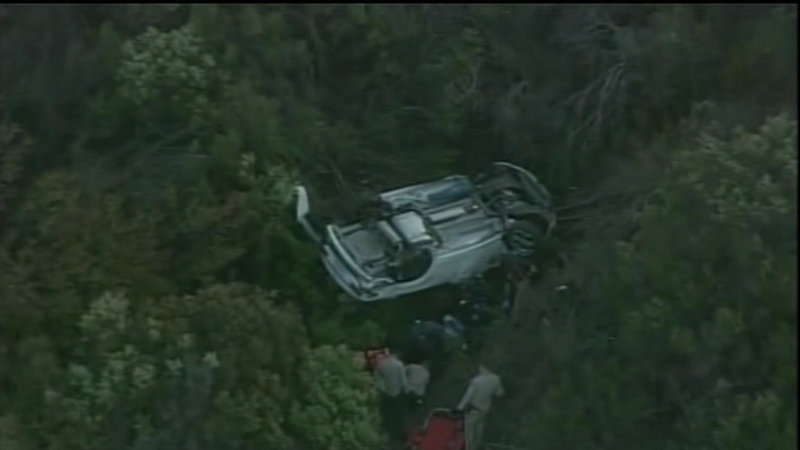 SAN JOSE -- A California car crash victim was impossible to find until a tech-savvy police officer made a crucial decision to track her down using an iPhone.

California Highway Patrol officers located the missing woman's Chevy Cruze at about 5:30 Tuesday morning. The missing car was 500 feet down a ravine off Mt. Hamilton Road in South Bay.

A Coast Guard helicopter was called while officers walked down the embankment through heavy shrubbery. They found 28-year-old Melissa Vasquez, who had been ejected from the car, and had been missing for 17 hours.

"The officers on the scene said she was face down. She was awake, coherent, and she was speaking to officers," explained CHP Officer Ross Lee.

Rescuers put Vasquez into an airlift basket and the chopper hoisted her out of the ravine. She was in the ICU after suffering injuries to her legs and her abdomen.

The CHP says they're still investigating the incident and they don't know why the car ended up in the ravine. Drugs and alcohol, they say, do not appear to be a factor.

But the real detective work began sometime after 2 p.m. on Monday, when the car's OnStar program detected a crash after two of the tires were ripped off the car. OnStar monitors told Campbell police the car was at Highway 17 and Camden Avenue, near Vasquez' home. Officers responded, but police heard and saw nothing. OnStar later updated the location to downtown San Jose. Again, police found nothing.

Officer explains how he used smartphone to find woman


The officer credited with finding her is back on the job after a very busy morning.

"I'm kind of known around the department as kind of a tech geek," Campbell police Officer David Cameron said.

Cameron is a shy and humble man. He spoke for the first time on Tuesday about his crucial role in finding Vasquez.

It wasn't until 3 a.m. Tuesday when Cameron went to Vasquez's house and found her iPad that he realized he could use Apple's Find My iPhone app to track her. But first, he had to crack all of her pass codes.

"I made an educated guess based on a series of common numbers people use for passwords and on the third attempt I was able to get in," Cameron said.

Then he remotely turned on her phone's location finder. Vasquez meantime, was miles away, thrown from her car, lying face down and hurt. In just minutes, Cameron had a read on her location and just 20 minutes later rescuers were lifting her into a U.S. Coast Guard chopper.

"I think somebody was looking out for her. Things fell in place and had those things not fallen in place, it could have been a totally different story," Cameron said.

At Regional Medical Center, Vasquez family rushed to her side and made an emotional plea.

"We would ask for prayers and ask that you respect the family's privacy," Stephanie Valdez, Melissa's cousin, said.

Cameron plans to visit Melissa in a few days.

Meantime, OnStar says its investigating why the system failed.

Apple does not market the find my iPhone feature to police, but it has been used hundreds of times by officers to find stolen devices and this may be the first time it's been used to save someone's life.

How to install the Find My iPhone App

If you have an apple device -- an iPhone, iPad or a Mac -- you can use the Find My iPhone feature to locate your device on a map. It'll even play a sound so you can track it down. And if you think your phone was stolen or lost, you can lock it and then track it. Or just erase all the information on the phone. All you have to do is log into your iCloud account and activate the app.