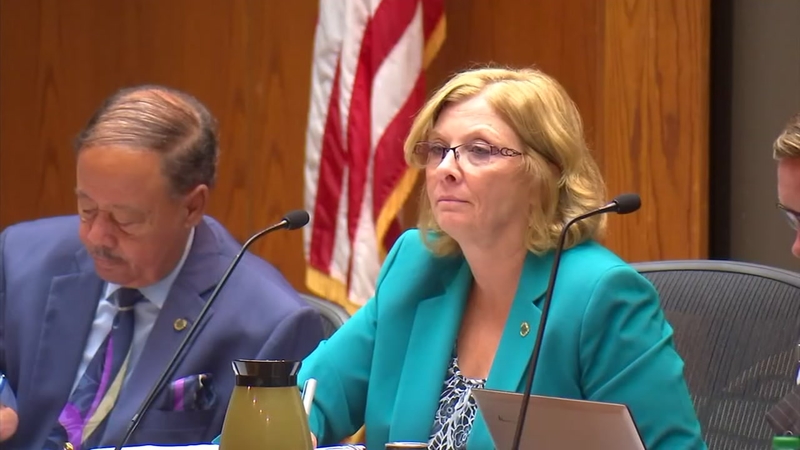 RALEIGH, N.C. (WTVD) -- On Wednesday, Nancy McFarlane announced that she will not seek a fifth term as Raleigh's mayor.

McFarlane, 62, was first elected to Raleigh City Council in 2007.

I have been lucky to be a part of helping to shape the direction of our city over the past 12 years, but it is time to step back for a little while, so I'm not going to run for Mayor this year. https://t.co/xIoSKMAd0F pic.twitter.com/rTMnmX1V7u

She served two terms before being elected mayor in 2011 -- the second woman mayor in Raleigh's history.

McFarlane said she decided against running for another term in order to spend more time on things she cares about most.

"I am going to focus on the things that really matter to me; my family, the community, the arts and the parks," she said in a news release. "Thank you all for your years of support. It has been an honor serving as your mayor."

"We used to fight together for the things we care about," McFarlane said. "Now it seems we just fight with each other. The mean politics of twitter and social media is painful when it's about you or someone that you love. This social disease has exploded since I first ran for city council in 2007."

McFarlane's decision to not seek reelection comes about a month after Raleigh Councilwoman Kay Crowder accused McFarlane's husband of verbally and physically assaulting her.

As for her time at the helm of the City of Oaks, McFarlane's spokesperson praised the mayor's role in leading the efforts to expand public transit, making more funding available for affordable housing, and supporting small businesses.

Meanwhile, Charlie Francis, who ran against McFarlane in the last election, told ABC11's Tim Pulliam that he will again run for mayor.

Francis said he'll be launching his campaign in a few weeks.

BREAKING: You saw it here first. Charles Francis announcing he will run for Mayor of #Raleigh NC. He told me in his first public interview today that he will be launching his campaign in a few weeks. Mayor @NancyMcFarlane decided not to seek re-election. Francis responds at 6p. pic.twitter.com/7ibWtWDeTp

McFarlane graduated from the School of Pharmacy at Virginia Commonwealth University.

During her 35 years as a Raleigh resident, she worked as a pharmacist while raising her family.

In 2002, she launched MedPro Rx, Inc., an accredited specialty infusion pharmacy that provides medications and services for clients with chronic illnesses.

'I would like to thank Mayor MacFarlane for her years of service to Raleigh and Wake County," Wake County Democratic Chairwoman Rebecca Llewellyn said in a release. "These have been prosperous times, but also difficult times with increasing growth and change. As we debate the future, there will be issues of affordability, transportation links, managed growth and increasing coordination between Raleigh and the other municipalities within Wake County. These are debates that need to happen, including all residents and businesses. As Chair of the Wake County Democratic Party I look forward to these debates."
Report a correction or typo
Related topics:
politicsraleighnancy mcfarlanepoliticsraleigh news
Copyright © 2021 WTVD-TV. All Rights Reserved.
TOP STORIES
LATEST: Some may need 4th dose of COVID-19 vaccine, CDC says
19-year-old already in jail charged in double murder at NCCU
Democrats unveil billionaires' tax to help fund Biden's spending plan
TX mother, boyfriend arrested in case of 8-year-old's decomposing body
Pandemic drinking leads to spike in liver transplants
Drone food delivery available for some in Holly Springs
Show More
Some businesses feel squeezed out by Seaboard Station overhaul
Wake County parent 'elated' vaccine for kids 5-11 closer to reality
Investigators to give update on fatal 'Rust' movie-set shooting
'Really hurting': Hoke County reels from loss of 2 students, sheriff
'Very fun': Durham youths enjoy Shop with a Cop event
More TOP STORIES News