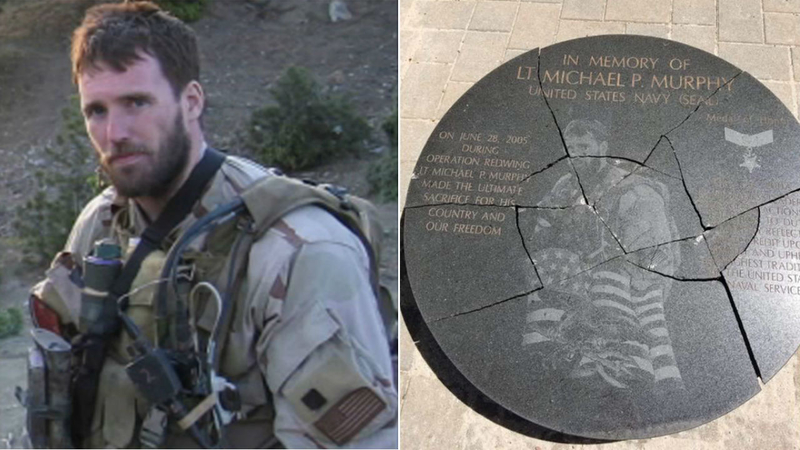 BROOKHAVEN, Long Island -- A 14-year-old was arrested after a memorial honoring a hero Navy SEAL from Long Island was destroyed.

Authorities said the suspect was arrested at his Ronkonkoma home early Friday morning on charges of criminal mischief. He is scheduled to be arraigned at Family Court on a later date.

Murphy was awarded the U.S. military's highest decoration for his heroic actions during the war in Afghanistan.

Murphy's father says he doesn't believe the vandal understands the significance of his actions.

"Unfortunately the stonework isn't here anymore, but if you look at one of the places where he struck Michael was right at the heart, which is like striking at the heart of America," Daniel Murphy said. "Michael was the type of person who would have wanted to take that man under his wing and talk to him."

Murphy's mother said she hopes someone speaks to the boy about what Lt. Murphy and his team of SEALS did for the country. She would like the child to read the book "Lone Survivor" which is about her son's mission. The book was made into a movie starring Mark Wahlberg.

"I lost Mike and then when I saw that I felt like I lost him again because, you know, I was proud to come down and see this," Maureen Murphy said.

"Lieutenant Michael Murphy served our nation with extraordinary courage, valor and dignity, and we are all indebted to him and his family for his sacrifice. He was a Smithtown native who was awarded the Congressional Medal of Honor, the military's highest decoration, for his actions in Afghanistan during Operation Red Wings on June 28, 2005, the first member of the Navy to be awarded the Medal of Honor since the Vietnam War. This most-esteemed award memorializes and honors his leadership and service, and to desecrate this honor is beyond the pale.

"I am appalled and disgusted by this apparent act of vandalism. The State of New York will fully fund the replacement of the plaque, and I hope this brings comfort to his family and community. The people of this state and this nation owe Lieutenant Murphy a debt of gratitude, and I personally thank him for his service."

The Murphy family said they would be willing to meet with the boy.

A new plaque is already being made. New York State as well as Suffolk County and the Town of Brookhaven have all offered to pay for the replacement. The town said it has received so many donations from private citizens that it needs to figure out who will make the final payment.

A local company has also offered to put in free surveillance cameras to monitor the site moving forward. The town hopes to have the cameras installed by the end of the month.