How North Carolina's 2 largest counties are responding to COVID-19 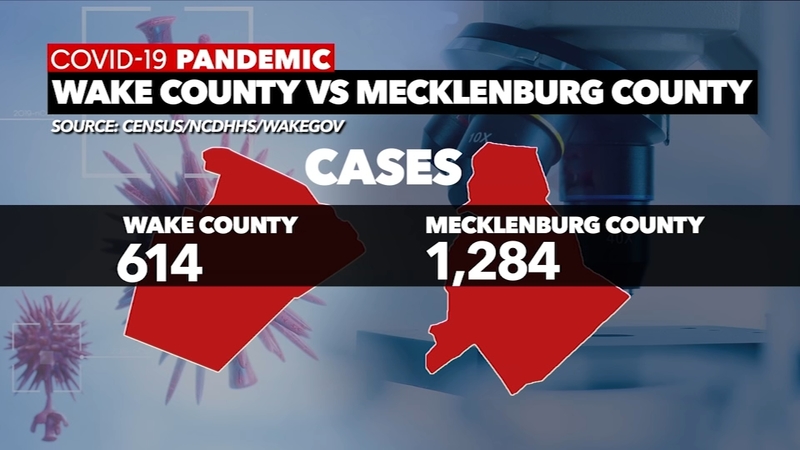 How North Carolina's 2 largest counties are responding to COVID-19

In Wake County, health officials have reported 614 laboratory-confirmed COVID-19 cases compared to Mecklenburg's 1,284 cases. Mecklenburg County has more than three times as many deaths due to severe complications from the novel coronavirus: 33 compared to 10 in Wake County.

"If an area is dense, that means it's more likely that people are able to spread the virus quicker," Petteway said. "So Mecklenburg may have different rates of testing and tracing and strategies than we have."

Data has shown the disparity the virus shows among African Americans and other races. Nearly a third of Mecklenburg County residents identify as African American compared to just shy of 25 percent of Wake County's population identifying as the same.

"If you look at the differences in the poverty rate and you know that African Americans tend to suffer more of the disparities in poverty and lower wage jobs," Petteway said, "that might be an influence on some of the differences."
Petteway also attributed Wake County's lower numbers to the "conservativeness and strictness" of its stay-at-home order. She believes it has helped the county flatten the curve.

In mid-March, the county saw COVID-19 cases double every three and a half days, per Petteway. At the end of the first week of April, the doubling took 8 days.

According to the Robert Wood Johnson health rankings, as cited by Petteway, Wake County is one of the healthiest counties in the state.

"That is because Wake County's area of strength include our clinical care, our hospital system but also some of the social and economic factors for our county are a little better than other places," Petteway said. "So that gives us a slight edge."

Petteway said the department is relying on state health officials and Governor Roy Cooper for guidance on when would be best for the county and the state to reopen.