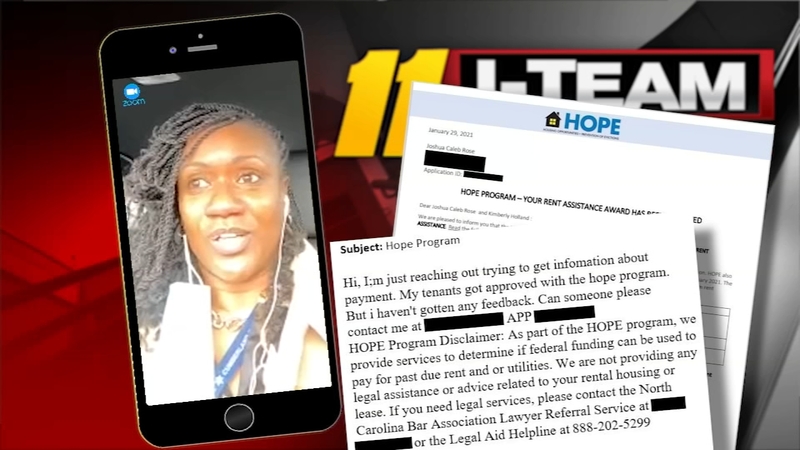 The North Carolina HOPE Program is supposed to help pay rent and utilities of Triangle residents struggling during the pandemic, yet millions of dollars that the state has in the fund continue to sit unspent.

As of Thursday, out of the $167 million in HOPE funding, only $59.4 million of that has actually been paid out to landlords and utility providers since the program launched in October.

Troubleshooter Diane Wilson has heard from more than a dozen landlords and tenants who have been waiting weeks, some even more than a month to get their promised funds.

"It's a whole lot of stress"

HOPE (Housing Opportunity to Prevent Evictions) is a statewide rental assistance program funded by the federal government and opened to applicants in October. The program closed to new applicants just weeks after launching after receiving more than 42,000 applications.

Devine got her application in time and was approved for both utility and rental assistance right away.

Her rent continued to be unpaid, her landlord growing impatient for the promised funds.

"I am not getting any answers," she said. "I feel like I've been given the runaround. It's a whole lot of stress."

Clayton resident Raimey Cooke faced the same frustrations when trying to get answers from her HOPE representative.

"There is so much miscommunication," she said.

Despite the Cooke family having their HOPE approval letter for utility assistance, their lights were shut off not once, but twice due to nonpayment.

"It's been a HOPE nightmare," Cooke said.

She says she and her landlord faced the same obstacle in getting answers. The promised rental assistance from HOPE was set to arrive after she applied in October and was approved, but by the beginning of February -- still no funds.

She says calls to 211, the number HOPE applicants are asked to call, and calls and emails to her caseworkers got her nowhere.

"I just need answers to be able to tell my landlord what's going on because, at this point, he thinks it's a scam," Cooke said.

Not only are Triangle renters frustrated with HOPE, but also landlords want to know, "where's the money?"

Fayetteville landlord Kim Holland hasn't received any rent since October from her tenant who was approved for $4,500 from HOPE.

"What about people that this is part of their income to pay bills?" Holland asked.

She says not having any rent since October has been tough and just having an approval letter from HOPE doesn't pay her bills.

"It's becoming a hardship for me, you go five months without any pay," she said.

Holland says she's called and emailed HOPE and 211 for weeks to find out when she will get the five months of back rent but has gotten no answers.

"If you're all are going to give this money out, it's a great program, but you still need to communicate with the people and let them know exactly how you're going to get their funds," Holland said.

As of Thursday, HOPE administrators say, out of the $167 million they have to give in rent and utility assistance, more than $138 million have been awarded, but only $59.4 million of that has actually been paid out to landlords and utility providers since the program launched in October.

"What we did in the program is to front-load the agreement," said Laura Hogshead, Chief Operating Officer for the North Carolina Office of Recovery and Resiliency, which runs the program. "So our primary concern was making sure landlords and tenants got the agreements so everyone knew what was coming. People could sleep at night and know the award was made."

Stimulus update: Where the COVID relief bill stands in Congress, what's next

Hogshead acknowledges that payments on those agreements are taking time and that landlords need their money.

"When we started this last fall, we did not know that within the course of three weeks we were going to have 42,000 applications. We were quickly swamped as were our community partners and that's why we've hired 170 people. That's why we have streamlined every process we can possibly streamline and still remain compliant because that is a concern we want to make sure that federal government doesn't come back and ask for this money back later," Hogshead said.

HOPE is assisting thousands of people here in the state. The $138.7 million amounts to 55,856 rent and utility awards to help 36,213 households impacted by the pandemic. Despite only $59.4 million paid to landlords and utility companies statewide, administrators say those numbers are increasing, literally, by the hour.

"We're trying very hard to make sure that we're complying on the front end that we're acting with all due haste and with incredible empathy, but understanding that these are still federal processes and they still do take time," Hogshead said. "The payments are catching up, we know that folks are waiting on them and we have sped up enormously."

Once we brought these cases to the attention of administrators with HOPE, along with the other cases in this story where viewers were also waiting for HOPE money, all but one landlord got their thousands of promised in HOPE funding.

For the one landlord who is still waiting, HOPE administrators say they are looking into the issue.

"Now that the weight has been lifted and the nightmare is over," Cooke said after her landlord got the money.

Help on the way?

Administrators at HOPE stress that if you were approved and have a signed agreement, you will get the money as quickly as they can process it.

Hogshead says if tenants or landlords are having issues she encourages them to call 211.

She does understand there may be delays in getting answers, but they are working hard to work through the cases.

"We know it's never going to be fast enough, but we keep improving, we keep getting better, and we are eagerly anticipating the next round of funding so that we can help more people.," she said.

The program will eventually reopen once the state gets guidance from the US Treasury on the new rules for the latest stimulus bill that Congress passed in December, which includes North Carolina getting about $700 million to help with COVID relief efforts.

Hogshead says her agency will oversee a large portion of those funds for rent and utility assistance once federal guidance is given.
Report a correction or typo
Related topics:
personal financencabc11 troubleshooterpersonal financehousingfinancecovid 19 pandemicrenters
Copyright © 2021 WTVD-TV. All Rights Reserved.
ABC11 TROUBLESHOOTER
'He ghosted us:' Unlicensed contractor scams another homeowner
Where's the money? Contractors say mansion owner owes them
How to find out if your information was part of a data breach
NC grandpa tricked into sending money to fake grandson
TOP STORIES
Raleigh takes steps to crack down on Glenwood South rowdiness
'He ghosted us:' Unlicensed contractor scams another homeowner
UNC chancellor says antisemitism has 'no place on our campus'
There's a mismatch between job seekers and open positions
'An amazing mom:' Friends mourn Apex teacher who died from COVID-19
Duke apartment residents warned about flooring, structural issues
Show More
LATEST: 1/3 of state employees ordered to be vaccinated are not
'More than hair': Fayetteville stylist helps those fighting cancer
'This is life-changing': Moore Co. man struggles with long-haul COVID
Authorities identify gunman who shot 15, killing 1, at TN Kroger
Residents push to change name of Raleigh's Cameron Park community
More TOP STORIES News