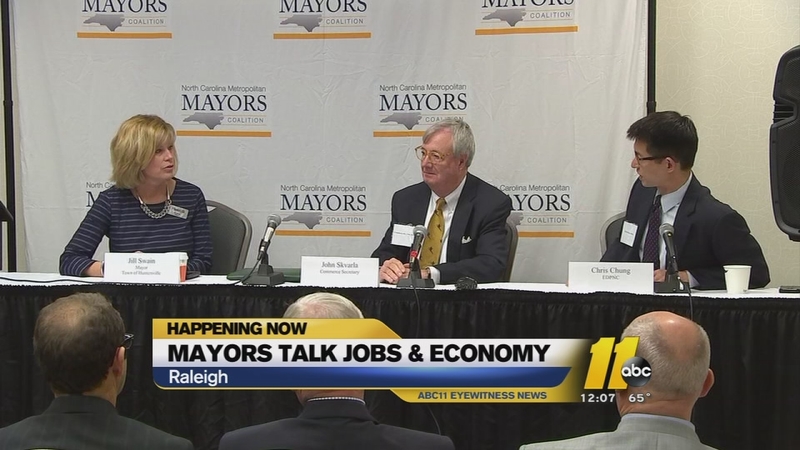 RALEIGH (WTVD) -- The mayors of North Carolina's largest cities, including Raleigh and Durham, gathered Wednesday to talk about jobs and the economy.

The mayors at the NC Metropolitan Mayors Coalition run cities of varying sizes, and they're all looking for ways to attract more jobs.

Huntersville Mayor Jill Swain said teamwork back home between three neighboring cities to recruit a business led to a rising economic development tide in that area.

"When we have companies that locate in Huntersville, where the land is, then we also have employees who may live in Cornelius and shop in Davidson," said Swain. "So all three towns win!"

Swain is encouraging the mayors to tweet success stories and advice heard at Wednesday's gathering to their constituents.

Swain said she has a manufacturer she can't name yet negotiating with Huntersville that could potentially bring at least 60 jobs.

"We do have another international food supplier that is interested in Huntersville as well," Swain explained. "So I may be gaining weight, but we will be gaining employees and more jobs!"

North Carolina Commerce Secretary John Skvarla told the group Raleigh's mayor is in a great position to bring in jobs, especially after the deal struck with the state to buy land once used by Dorthea Dix Hospital.

The bottom line for the mayors: think big, accentuate the positive aspects of your city, and keep constituents informed about any pending opportunities.

"For every job that a community gets, 1.7 service jobs arise out of that. So I think that rocks for our area!" Swain said.